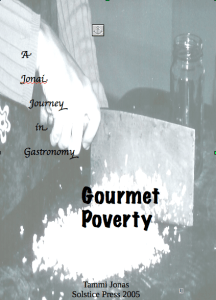 In 2005, living in a chaotic house with three kids under 6, I cooked myself sane. And then, in response to lots of requests from friends for recipes, I was inspired to write my own cookbook, which I gave to about 60 friends in Australia, the US and the UK for summer solstice that year. I’ve since sent the pdf to dozens more friends, old and new.

I’ve had a dream that I would pitch the book, which is called Gourmet Poverty, to a publisher one day. The realities of study, work and family life have meant it’s remained low on the priority list. I’ve also long intended to write a second version, which I’m sure I’ll do once we’re out on the farm. But for now, I’m simply going to share it here. It’s full of recipes and stories of where I got them and who we’ve eaten them with, as well as possibly an overdose of photos of my much-adored brood.

For those of you with your own copies, you’ll see I’ve made a couple of minor revisions – I strongly encourage you to cross out the original pizza recipe and follow the new one!

Here it is, world, Gourmet Poverty by Tammi Jonas. 🙂