I’ve already expressed my opposition to any proposed ag gag laws and related desire for more transparency, so today I’m going to be brief and blunt as I extend it.

Intensive livestock farming needs to stop. Here are a few reasons why:

The first four points are virtually indisputable, so I’ll say a couple of things about the last one.

I have pursued a life as a free-range pig farmer because I believe so strongly that people should have the choice of genuine pastured meat to help them stop eating animals raised in sheds and cages.

I call myself an ethical farmer because we raise our animals on the paddocks in a way we believe is ethical. I do not say this to suggest all other farmers are unethical, however, as I’ve said, I do believe it is unethical to raise animals in cages.

If you call your produce ‘farm fresh’ or ‘natural’, are you suggesting everyone else’s produce is rotten and fake? No? I didn’t think so.

Some animal rights activists spend their lives trying to take footage of what happens in intensive farms because they believe so strongly that it is wrong to confine, kill, and eat animals.

These activists are targeting intensive livestock farms, as well as live export. If you’re not confining animals on land or on a ship, they’re not likely to sneak in and film your operation. And if you share your own story, open your doors, and crucially, do what you say you’re doing, it’s very hard for someone else to catch you out.

They are the canary in the mine, people, and if you don’t let the animals out you might get shafted.

I would genuinely like to see a gentle transition that supports family farmers as they move away from intensive animal farming, not a shutdown of the industry that ruins lives while trying to protect animal welfare. It doesn’t have to be all or nothing, but it does need to change.

Politicians may make more laws, but whistleblowers will find a way to uncover what they believe is an injustice, so why not just stop the injustice?

PS Russ Patterson wrote a response to my original transparency post on Ann Britton’s blog. I’ve responded to his arguments there.

The debate is raging once again around animal welfare activists trespassing on private property to obtain footage of conditions in intensive livestock farming. The activists’ stated aim is to expose what they believe are unconscionable practices in the rearing of animals. It seems the debate recently was re-ignited by a column by a celebrity personal trainer.

A number of farmers have reacted with concerns about biosecurity on their farms and risks to their entire herd from disease and distress, as well as dismay at invasions of their privacy, and some have expressed support for so-called ‘ag-gag laws’ as introduced in the US. These laws make it illegal to film or photograph practices on farms without permission from the owner. There’s also been a mildly amusing open letter from ‘Bill the Farmer’ to the celebrity above asking her to live under constant video surveillance.

The hyperbole around factory farming and ag-gag laws includes allegations of activists as ‘terrorists’, factory farms as places of ‘horror’, and vegan ‘secret agendas’.

But ask a recently arrived asylum seeker from Afghanistan if they think animal welfare activists are terrorists and I suspect you might gain a little healthy perspective.

I usually steer away from the phrase ‘factory farming’ as I know it gets most intensive growers’ hackles up. To be clear, I don’t avoid it because I think it’s wrong (raising hundreds or thousands of animals in sheds in an industrial model is, in my view, rather accurately referred to as factory farming). But I want everyone in the discussion to be able to listen, so I try to avoid red flag phrases. I therefore use ‘intensive farming’ (and for the record, free-range farming is known as ‘extensive’).

I will use the label ‘ag-gag laws’, as I think they’re well understood now, and we don’t have a common alternative of which I’m aware. I appreciate that those who support these laws may take umbrage at the phrase, and ask that you bear with me.

As I see it, there are a number of stakeholders in this debate. There are the animals in intensive systems. There is the soil and water on and around the farms. There are the people who work on these farms, including those who own the farms. There are the families of the owners – I’m thinking particularly about the family farms where they live somewhere on the property. And then there is the local community, and the broader community of people (from vegan to omnivore) who have differing levels of concern about the ways animals are raised on farms, whether they eat meat or not.

Of course there are property rights, and trespass is illegal in Australia. So we already have a law that prohibits entering another’s property without permission to obtain footage of their practices.

I accept and share the concern about fear and feelings of violation at someone trespassing on your property with an intent that is contrary to your interest. Anyone who has had their home broken into knows the feelings of vulnerability that arise after a burglary or theft. If a vegan abolitionist entered our farm without our knowledge to film our pigs, I would be worried about their other possible motives, whether my children were out on the paddocks by themselves at the time, and  whether they took anything except images away with them.

But they have no need to do that on our farm, because we practice radical transparency. We have documented and outlined on national radio all of our farm management practices in great detail. And we invite the public in regularly – in fact people are welcome any day of the week that we’re here (which is most).

You’re welcome to photograph or film anything you see while you’re here, and when I find myself thinking, ‘oh, I hope they don’t take a photo of that mud patch where the pigs have turned the soil completely because we’ve been a bit slow in rotating them to another area,’

I reflect on how we really just need to move the pigs, not stop the visitor taking a photo.

What we need are not more laws that will stop people trying to expose what they believe is an injustice. We already have laws to protect your right to property and privacy.

Ag-gag laws must surely re-affirm the public’s concern that farmers have something to hide. Instead we should do as Australia Pork Limited (APL) did last year when footage was secretly filmed of an intensive piggery in NSW – APL got footage of the same piggery in daytime and stood by it.

I personally was still unhappy with what I saw, and so continue not to buy nor eat intensively-raised pork, but I applaud APL’s transparency to enable me to make an informed decision.

Bangalow Sweet Pork is another example of an intensive pig farm that has been prepared to be transparent about their farming practices. In 2009, they opened the doors for a Super Butcher video, and showed everything from their farrowing stalls to the group housing for growers. Again, seeing all those pigs confined in that fashion doesn’t sit well in my ethical code, but the information is there to empower the public to make ethical decisions.

The court of public opinion is real, and whether we like it or not, largely determines what is and is not acceptable. It’s a blunt jury, often led by a vocal minority, and yet when the minority exposes practices to the majority in a compelling way, the majority start to demand change.

Look at the growth of free-range eggs in Australia. Whatever issues there may be with the certification systems (and they are many), we didn’t have free-range eggs just 20 years ago unless you were a farmer or one of the rare suburbanites with chooks in your backyard. That movement has grown enormously, and we even have ‘caged eggs’ labeled as such.

How I would love to see ‘caged pork’ written on labels!

It is surely in nobody’s interest to criminalise those intent on exposing injustice, rather than welcoming greater scrutiny of industrial agriculture’s impact on animals?

The more farmers practice radical transparency, the more the public will trust us, and the more we will continue to improve our practices. And if we’re transparent about our practices, we can combat the invisibility and lower animal welfare standards of imported pork smallgoods in Australia (70% of the total).

Radical transparency is a powerful motivator to do your best, and I for one welcome it. 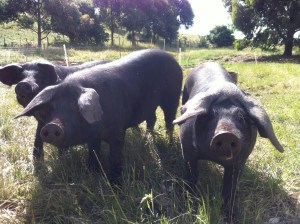