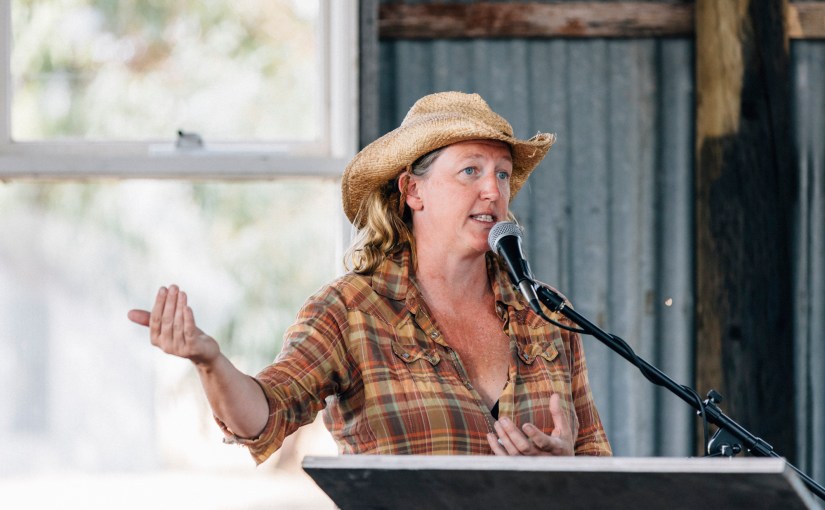 The infrequent and imperfect yet impassioned musings of a farmer, meatsmith, activist, mother, wife, daughter, sister, friend, and cultural commentator with a penchant for food and community…

I am an ethicurean farmer, mindful meatsmith, agrarian activist, and cultural theorist with a focus on ethical, agroecological food systems. I’ve been widely published on a diverse spectrum from food ethics and politics, agroecology, multicultural foodways, feminism and food, and food tourism to culinary cosmopolitanism.

I am a co-editor and co-author of Farming Democracy: Radically transforming the food system from the ground up (2019), and my most recent publication was a co-authored chapter in the 2019 volume One Planet One Health, detailing a collaborative regional approach to building greater resilience into agricultural landscapes and regional and rural communities.

I have recently commenced a PhD analysing the economics and ecologies of raising rare breed livestock as compared to industrial breeds, and working explicitly as an activist anthropologist, I am also analysing the potential or actual impact of various UN governing bodies’ promotion to increase agricultural biodiversity on Australian agriculture.

I’m also president of the Australian Food Sovereignty Alliance (AFSA), promoting everyone’s right to access nutritious and culturally-appropriate food grown in ethical and ecologically-sound ways, and our right to democratically determine our own food systems. This role takes me around the world to work with peasant farmers and indigenous peoples in the global fight for food sovereignty, working closely with many other members of the International Planning Committee for Food Sovereignty (IPC), and regularly attending meetings of the Food & Agriculture Organisation (FAO) of the United Nations (UN), and many other UN governing bodies.

This blog focuses on hopeful futures for food sovereignty, agroecology, locavorism, and ethical omnivorism, while indulging in occasional tales of my quotidian existence as a cook.

I also write a farm blog ‘The Farmer & the Butcher’, with details of life at Jonai Farms & Meatsmiths  – our pastured rare breed pig and cattle farm in central Victoria where I live and work with my hypercompetent husband, the youngest of our three children (the #orsmkids), and a beautiful community of workers and volunteer residents.

Jonai Farms is a paddock to paddock CSA (community-supported agriculture), with surplus from the boning room processed into bonechar and returned to the soil to produce a small commercial crop of garlic. 95% of our produce is sold to 80 household members in Melbourne and the region. Our livestock are fed so-called ‘waste’ – surplus, damaged, or unwanted produce from other food and agriculture systems in Victoria (e.g. brewers’ grain, eggs, milk), creating a net ecological benefit by diverting many tonnes of organic waste from landfill, and exiting the fossil-fuel-intensive model of segregating feed production from livestock farming.

The farm embraces degrowth as a philosophy to ensure sufficiency for all, and we Jonai are embedded in many solidarity economies in our open, connected and deeply localised community. We value conviviality and mindful appreciation of the fruits of our labour, stopping to enjoy three meals together each day.

You can email me, Tammi Jonas, on tammois (at) gmail.com

Agritourism: the way of the future for many farmers, Victorian Agribusiness Summit 2016: Agritourism, Healesville, 24 June 2016.

Joel Salatin Was Right: Everything I Want to do is Illegal, Future of Local Food conference, Municipal Association of Victoria, 10 September 2015.

How to Be a Fair Food Farmer, sponsored by The Field Institute, Collingwood, 24 April 2014.

Beyond the Supermarket, hosted by the Open Food Foundation, Sustainable Living Festival, 15 February 2014.

The Food Revolution is a Big Fat Lie, at The Lake House, Daylesford, 5 April 2012.

Agribusiness leaders: Australian farmers leading the way in their industry, by Sarah Hudson, in The Weekly Times Farm Magazine, 10 April 2017.

Deeper into Food, by Imogen Eveson, in Broadsheet, November 2015.

This Little Piggy, by Linsey Rendell, in Peppermint Magazine, Winter 2015.

The Butcher & Her Brood, by Lauren Mitchell, in Slow Magazine, Winter 2015.

Restoring the Balance, by Amanda Burdon, in Outback Magazine, June-July 2015.

Former vegetarian cuts to the bone of ethical farming with nose-to-tail pig-farming project, in The Leader, 24 February 2015.

From Food Blogging to Food Butchering – the Journey of Tammi Jonas & the Jonai, by Amanda McInerney, in Lambs’ Ears & Honey, 5 July 2013.

Jonas family has snouts in trough, by Sarah Hudson, in The Weekly Times, 19 June 2013.

Food and the Art of Representation, by Julie Hare, in Campus Review, 15 February 2010.

How to Respond to Vegan Abolitionists, in ABC The Drum Opinion, 8 May 2015.

Intellectual honesty and an open mind, in ABC The Drum Opinion, 6 January 2012.

Cosmopolitanising the Cohort, aka Internationalising the Curriculum in The Advocate, 20 November 2011.

Reflections on a Convoluted Pathway, in The Advocate, 21 June 2011.

Some problems can be solved simply by throwing money at them, in The Advocate, 15 March 2011.

A Foreign Despair in ABC The Drum Unleashed, 3 March 2010.

Is There Life Beyond the Barbie? in New Matilda, 9 February 2010.

Jonas, Tammi. “When Eating Your (Exotic) Greens Can Green the World” Food and Agriculture Under the Big Sky, annual meeting of the Association for the Study of Food and Society and the Agriculture, Food and Human Values Society, Missoula, MT, USA, 9-12 June 2011.

Jonas, Tammi. “From Meat Pie to Phở in Just Four Decades: If you are what you eat, are Australians cosmopolitan?” The Federation of Taste, 18th Symposium of Australian Gastronomy, Canberra, 13-15 May 2011.

‘Culinary Cosmopolitanism‘ in Springer Encyclopedia of Food and Agricultural Ethics, 2012.

Why a regional butcher wants us to watch an animal rights documentary, Life Matters with Hilary Harper, ABC, 29 October 2019.

Has the Australian media exploited sufferers surviving in the aftermath of the Christchurch earthquake?, interview by Mig Caldwell for The Fourth Estate on Radio 2ser.

Breathless in Oregon Rivers, Back in a Bit, Crikey, 2 September 2011.

Processed pig bits, Civil War sadness, and meeting the Amish, Back in a Bit, Crikey, 21 June 2011.

2 thoughts on “About Tammi Jonas”