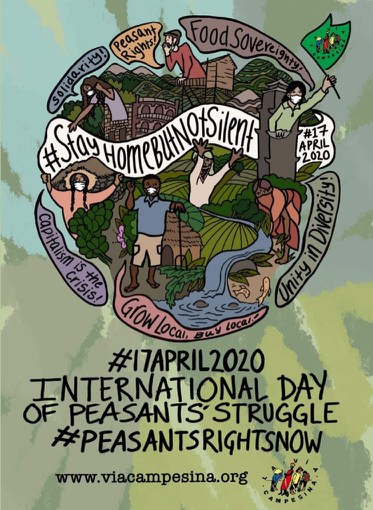 If you’ve been paying any attention to the myriad articles talking about the likely causes of the current COVID-19 pandemic, you’ll have read that the hippies were right – rampant destruction of the environment has led us into a global crisis, and industrial agriculture is a solid contender for worst offender. Whether this particular coronavirus came from bats, pangolins, or another creature isn’t really that important – the knowledge that it’s a zoonotic disease (passed from animals to humans) – and that all of the other most recent outbreaks (SARS, MERS, Ebola, Nipah, Zika…) were too – offers more-than sufficient evidence to act on. In fact, the FAO tells us that more than 70% of all infectious diseases in humans since the 1940s can be traced to animals.

Rob Wallace, author of Big Farms Make Big Flu can answer a lot of your pressing questions on these theories, so go listen to him here. (And then google him and find the hundreds of other interviews and papers he has produced on this topic since well before the outbreak began. (One of the hardest things about being Rob right now must be resisting the daily urge to shout ‘I told you so, you bastards!’)

Read this 11-page communique from the International Panel of Experts on Sustainable Food Systems – it will give you all the information you need on the causes and potential solutions to the pandemic. And if you’re time poor, check out this shorter piece from New Matilda here.

The jury is in – industrial agriculture is a menace to society.

Some of us have been banging on for many years about the dangers of intensive livestock production, massive global losses of biodiversity, and the narrowing of genetic diversity in agriculture specifically, fast animal turnover in industrial systems, separating breeding and growing operations (with attendant loss of potential herd immunities), and habitat fragmentation, and it’s turned out we were right all along. So what’s going to happen? And what alternative futures lay before us?

First, a quick look at impacts, and then some hopeful possible solutions…

Impacts on the food system

The impacts are unfolding fast, and in many countries they are awful. I’m not going to write about the devastation the pandemic is having in countries where health care systems have been undermined by neoliberal regimes that have systematically implemented policies that have rejected the public interest, and nor am I going to offer analysis of the structural racism and classism that will see the most disadvantaged in society feel the brunt of this crisis. My expertise is in food systems, so that’s what I’ll stick with. I’m also going to focus primarily on Australia, because you simply can’t extrapolate the disruptions to social cohesion, well-being, and domestic economies from one country to another without making some terrible generalisations and misleading blunders.

What are the initial impacts of the COVID-19 pandemic on Australian food systems?

Supermarket shelves emptied fast as panic buying set in. Their ‘just-in-time’ model of distribution has proven to be as precarious as food security researchers have told us for many years. But they have also aggressively hired the newly unemployed to stack shelves more rapidly – a move that could cast them in the light of savior in spite of decades of predatory behaviour.

Many farmers’ markets have been closed, either by risk-averse (and ill-informed, I would say) councils, or the organisers themselves, though others remain open, with social distancing protocols in place. This has left many small-scale farmers in the desperate position of having to rapidly find other ways to connect to their eaters, and forced some farmers’ market shoppers back into the arms of their jilted supermarkets.

Most restaurants and cafes are either closed or doing takeaway or delivery services only. The future of the hospitality sector is in question as food service workers scramble to survive. It remains to be seen whether the government’s bailout packages will be enough to keep people fed and housed through this crisis.

Farmers whose usual market is food service were thrown into crisis along with the nation’s chefs and other workers, and they have had to rapidly find new markets for their produce. For small-scale farmers, there has been a greater capacity to pivot to selling directly to households, though in many cases this has meant arduous hours doing direct deliveries without any time to develop these new systems.

The legends at Open Food Network have risen to the challenge to bring a thrilling wave of new farmers onto their platform to directly connect with eaters looking for alternatives to the stupidmarkets.

For large-scale farms, there is no such agility in a global pandemic. If you’re a watermelon grower in the Northern Territory whose market is primarily restaurants, caterers, and airlines, there is nothing to do but watch your melons rot in the fields. When you’re talking 600 tonnes v. 6 tonnes of produce to sell, selling direct to eaters is not an option.

For those just tuning in, my hypercompetent husband Stuart and I are small-scale pastured heritage breed pig and cattle farmers, and while our farm exists largely separately from the commodity food system, we remain reliant on two critical umbilicals to the industrial machine: feed and abattoirs.

When we shifted to an entirely waste-stream feed supply from our local brewery and other produce from other surplus yield, we thought we had exited commodity feed production. But the majority of our feed supply is detritus from the industrial system built on growth and volume – so we lost most of our feed sources overnight as pubs were shut down and the brewery stopped brewing. We’re still receiving occasional container loads of muesli bar ingredients amongst other diverse oddities as food waste in fact just got worse with the sudden disappearance of food service, but the reliability of the nutritional quality of our feed took a steep dive. And we’re not the only ones – small-scale pig farms across Australia have been egging each other on in our pursuit of non-commodity grain and ecologically-beneficial feed options, and many of us now face the loss of this resource and need to return to commodity grain direct from the feed supplier. A year ago this wasn’t even a viable option as the drought drove prices up to more than double in some cases. I’ll return to possible solutions that don’t involve commodity grain in a future post once we’ve given it more thought.

So more expensive and ecologically dubious feed is one direct impact small-scale livestock farmers are grappling with, and the other threat we face is the potential closure of abattoirs, as is already happening in the US. The problem of a highly centralized food system is that there are so few facilities left, nearly all owned by a handful of multinational corporations, and if they are forced to close, farmers of all sizes lose their options. Given the low margins most abattoirs operate on in the best of times, one can only assume that many may not be able to continue in the face of a prolonged shutdown. While Australia’s control of the virus is leagues ahead of the US and our case numbers still quite low, an outbreak in a large, vital facility could still be devastating.

Together, we’ve got this

Some of you reading this have read and/or heard my positions on how to solve the world’s problems before, and you, like me, may have thought, ‘sounds great, but a bit utopic, hey? I mean, capitalism isn’t going anywhere…’ But then the current consequences of humanity’s failures have offered us an opportunity to ‘test the model’, shall we say. Guess what we’re finding?

Globalised food systems, capitalism, and disconnected atomized populations are just as brittle as some of us said they were.

Local food systems, solidarity economies, and strongly networked and collectivized communities have got this.

The upsurge in people seeking memberships with community-supported agriculture (CSA) farms is breathtaking. Farms that had struggled to compete with peoples’ addiction to ‘convenience’ and achieve full subscriptions are now turning people away. Others are increasing production to let some more in. Those of us who were already full are doing what we can to support our members who’ve lost their jobs – our turn to look after them, because that’s how solidarity economies work – it’s a two-way street.

A very smart comrade asked me whether I thought small-scale farmers (aka ‘peasants’) ‘can enter and exit the market as they need to. When times get tough, cut back to subsistence (in a way corporate farming can’t).’ It’s an interesting question about the variables that might offer resilience at different scales. While I think that peasants in the Global South might have some of this flexibility where they have remained quite separate from industrial food systems, the ‘new peasantry’ that has arisen across the world over the past decade (like farmers such as ourselves) probably has less capacity to expand and contract in the same way, primarily due to carrying high levels of debt. Flirting with capitalism while trying to crush it is a dangerous game. Which is not to say that taking on debt makes one a capitalist, but rather entwined in a system that has made it genuinely difficult to make it obsolete.

But what I will say for the peasants of the world, be we from a long line of people of the land or relatively newly boots on soil is that resourcefulness and frugality are our bedfellows. Unlike our industrial counterparts, most of us eat what we grow, and we grow what we eat. We savour the products of our labour, and we maintain old traditions of preserving for the lean times. These are the hallmark attributes of peasants the world over, and as I’ve watched my peasant comrades from Australia to Italy, China to America, South Africa to Brazil, I’ve seen their self- and community- sufficiency as the world’s original preppers have found ourselves prepared. We guiltily share how much we’re enjoying lockdown, because farmers eat lockdown for breakfast – it’s like most days of the week for us, but better because we’re forced to be where we most want to be, and so have more time for growing, preserving, and planning a better system.

And planning we are, on our farms, with our communities, and in our collectives. Buckminster Fuller famously said that ‘You never change things by fighting against the existing reality. To change something, build a new model that makes the old model obsolete.’ We have been building the new one (while also fighting the old one), and now we’re (mostly) ready. The old system is eating itself, the new one is going to feed you.

Remember – together, we’ve got this. That means all of us. If you’re unemployed or looking for ways to foster your community – find or start a local Mutual Aid Group. If you’re a farmer or an eater in Australia, join the Australian Food Sovereignty Alliance. In the US, join the US Food Sovereignty Alliance. Every country has its collectives – join yours. Wherever you are, collectivise, organize, and ACT.