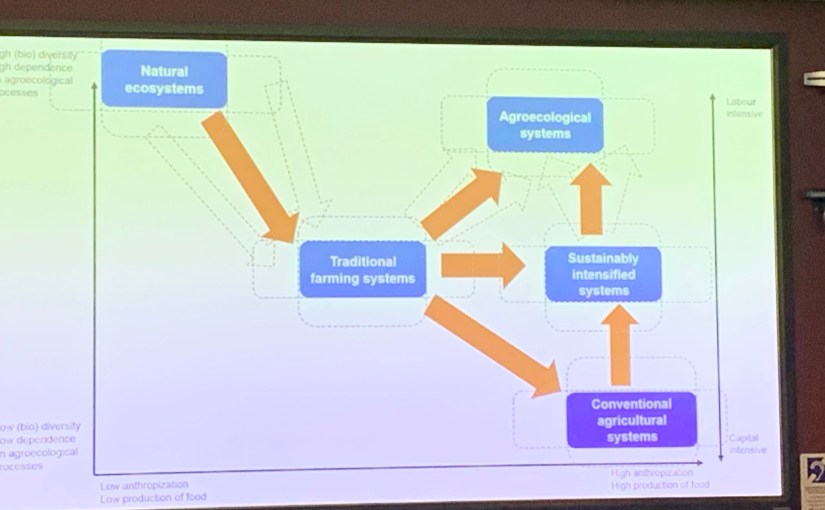 [Note: this was first posted on the Australian Food Sovereignty Alliance (AFSA) website]

In April, AFSA attended a seminar hosted by the CSIRO in Canberra, giving the High Level Panel of Experts on Food Security and Nutrition (HLPE) a chance to share their current work on Agroecology and Other Innovations for Sustainable Food Systems with the Australian public and policymakers. The HLPE is an expert panel created within the UN Committee on World Food Security (CFS) to facilitate policy debates and inform policy making with independent research.

The seminar was not particularly well advertised amongst farmers and their representative bodies, and I believe AFSA was the only representative organisation for farmers who attended. In fact, I learned about the seminar from activists and FAO staff in Rome – not through any local channels. Conversely, Bayer was there – the world’s largest supplier of seed and agri-chemicals after last year’s merger with Monsanto – they now control about 25% of the seed & pesticide market globally.

The event started out promisingly enough, with assertions that it used to be ‘agriculture versus the environment’ but that ‘that time is over,’ and repeated assurances that we are beyond the time for business-as-usual approaches given the urgency of the need for radically different agricultural practices in the face of a rapidly changing climate.

The Chair of the HLPE Steering Committee Patrick Caron gave an insightful overview of the context of the report on agroecology and ‘other innovations’, in which he pointed out that ‘when people talk about agroecology, sustainable intensification, precision agriculture – they have very different things in mind…’. Caron explained that this report’s role is to understand disagreements and to shape the international agenda.

He was followed by Fergus Lloyd Sinclair of the Agroforestry Institute in Nairobi, the HLPE Project Team Leader, who presented a very encouraging update on their work on the report to date. He first candidly shared what a ‘schizophrenic terms of reference’ the HLPE was given by the CFS, pointing out that ‘agroecology’ and ‘other innovations’ can be distinguished on the basis of principles. Sinclair asserted that ‘agroecology is a dynamic space, with many actors… not prescribed… locally defined in different ways by the people who are practicing it…’ and that there is a ‘strong connection between indigenous knowledge, traditional agriculture systems, and science.’

He went on to explain that agroecology as an innovation is easily distinguished from other approaches such as ‘sustainable intensification’ (and ‘climate smart agriculture’, ‘nutrient sensitive agriculture’, because agroecology (which may broadly include aspects of organic agriculture, agroforestry, silvopastoralism, and permaculture) is labour intensive rather than capital intensive. It relies on the humans in its system for knowledge and labour rather than capital intensive technological innovations that seek to largely replace human labour and often even knowledge.

Sinclair also explained the HLPE’s pitch to include ‘agency’ as a fifth pillar of food security – a concept already fundamental to food sovereignty, which asserts everyone’s right to collectively participate in food and agriculture systems.

After this rousing start, we watched as the CSIRO took to the podium. After thanking her colleagues from the HLPE and agreeing that we cannot continue with ‘business as usual’ approaches, the Acting Deputy Director of Food and Agriculture gave a 20-minute presentation on business as usual. She started with some stats:

She then asserted that ongoing innovations are needed to protect our natural resources as well as agriculture, requiring new forms of surveillance. Wait, what? Next, regarding upcoming innovations, she said, ‘I aspire for a future where Australian ag is a price-setter in the global market.’ Okay, but what about agroecology?

Here’s a list of some of the non-business-as-usual innovations cited by the CSIRO at this seminar on agroeocology and other innovations:

I guess the CSIRO is more in the ‘other innovations’ camp. (In fact when a like-minded colleague asked the CSIRO speaker between sessions why she didn’t speak about agroecology, she responded that she was ‘instructed not to.’ Let that sink in for a minute.)

Our mates from Bayer were the first question off the rank after the opening speakers, revisiting a point Sinclair made about an ‘increasing moralisation around food.’ The Bayer rep asked Sinclair how he believes the ‘moralisation of food’ impacts on equity. It is a tried and true rhetorical trick from industrial ag proponents, who often seek to establish their own moral position with appeals to equal access and the role of (presumed but not always proven) cheap technologies (that they own) to ‘feed the masses.’ They may as well exclaim, ‘Let them eat cake!’ and be done with it. Whether posed as a question or an assertion, this device always willfully ignores earlier expert points that hunger is not caused by scarcity of food, but rather by failures in governance and distribution.

During the break I was introduced to another CSIRO senior staffer as the president of the Australian Food Sovereignty Alliance. His response was to raise his eyebrows and yelp, ‘Food sovereignty? That raises alarm bells with policy people!’ To which I calmly responded, ‘Really? Policymakers are alarmed by peoples’ right to democratically participate in the food and agriculture system?’ ‘Yes!’ he intoned, ‘Internationally it impedes trade!’

I think that rather than bore you with the rest of what we heard from the CSIRO at the seminar, all of which is in line with what’s cited above and demonstrates their slavish devotion to free trade in capitalist global markets to the detriment of most farmers and eaters everywhere, I’ll leave you with some more interesting input from the HLPE.

Caron gave a summation of the status of the current report on agroecology and ‘other innovations’, which has passed Version 0 and a period of public consultation, with draft Version 1 due to be released soon.

Part one of the report asks: What has changed in past 20 years regarding food security & nutrition (FSN)?

Part two of the report examines the ways in which food systems are changing, and reminds us that the question is not how to feed 9 billion people, it’s how to feed them in a sustainable way while providing decent livelihoods for producers. We can use the food system as a lever to address all the Sustainable Development Goals (SDGs). ‘We thought that improving supply and access to markets would help everyone but we were wrong.’

The third part of the draft report has the much-anticipated draft recommendations – what’s needed to make food systems sustainable? The answers warm a food sovereignty activist’s heart. How to improve food supply? It could be through investing in knowledge and technology, reducing food waste, internalizing externalities – they’re all possibilities. It must be through strengthening resilience – investing in small-scale ag, securing land and tenure rights, securing social equity and responsibility with social protection systems, supporting women and youth, creating decent jobs in agriculture, through investing in education for all.

The HLPE reminds us we can’t forget the need to change consumption habits, and that to do so we need to change the food environment – advertisements, subsidies, and banning some types of food like we have with alcohol and tobacco. The CFS is supposed to draft voluntary guidelines to be agreed in 2020.

Before closing we had a final opportunity for questions or comments, so I took the opportunity to express concern at the CSIRO’s focus over the course of the day on exports, growth, and increasing yield in spite of the obvious environmental degradation witnessed up Australia’s eastern coast over the past two years due to extreme levels of drought in a changing climate, and also in spite of the expert position presented here and for decades now that we don’t need to grow more food, we need to make food systems more democratic. The response from the CSIRO was, ‘we’re an independent science research body – we can’t take sides.’

Well AFSA can, and we choose a habitable planet for generations to come. By not joining the heavy weight of evidence showing the changes needed in our food and agriculture systems, CSIRO are taking a side too – commonly known as the wrong side of history.