While at Slow Meat in Denver I picked up a copy of The Meat Racket: The Secret Takeover of America’s Food Business. This critical book details the history and current oligarchical state of the meat industry in America in no uncertain terms – an industry built entirely on unfairness to animals, land, and people. I’m planning to write more about the book and what I saw in America’s heartland in a later post, but I’d like to here foreground my account of Slow Meat with some key issues raised by author Christopher Leonard.

Leonard has this to say about Tyson Foods, one of the biggest multinational food corporations in the world:

…the company has swallowed up all the businesses that used to make up a small-town economy. It owns the feed mill, the slaughterhouse, and the hatchery. It owns the trucking line and the food-processing plant where raw meat is packaged and cooked into ready-to-eat meals. While Tyson doesn’t directly own most of the farms that supply it with animals, it controls them through the use of restrictive contracts. It’s as if the broad-based network of small businesses that were once the backbone of rural America had been sucked into a single, towering silo called Tyson Foods. The company owns everything that happens inside it. There is no competition among the various entities, no free market to determine the price at which baby chicks are sold to farmers or at what price grown chickens are sold back to a slaughterhouse. It all happens within the walls of Tyson’s corporate structure. (p.5)

There are just four meatpacking companies that control 85% of the meat industry in the US. When Upton Sinclair wrote The Jungle in 1906 and exposed the seedy, dangerous underworld of meatpacking, the uproar led to the passing of the Meat Inspection Act and the precursor to the current Food & Drug Administration (FDA). Workers’ unions were formed, farmers flocked to foreclosure auctions with guns and ‘ensured that the original owner of the farm could buy it back for a bid of one dollar’ (p.57). The dollar auctions became a part of American history.

And yet now this wonderful country that once stood up against tyranny and fought for the rights of the oppressed is one of the most brainwashed and worst fed in the industrialised world. These are hard truths, evident in every Walmart aisle and on every fast food menu across the nation.

With this background, and as a long time advocate for fair food, and fair meat especially, you can imagine my excitement when I learned of the second Slow Meat symposium to be held in Denver, hosted by Slow Food USA. Described as a gathering of global thought leaders on the need for radical food systems change, focused particularly around meat, Slow Meat sounded like something I simply could not miss.

It was pitched as a competitive application process – I don’t know whether it was in truth competitive selection, but the 217 delegates were most definitely changemakers in their respective communities and many on the broader stage. The diversity and depth of the people I met over the three days I spent with them was stimulating, inspiring, and challenging. These are people who understand the food system, are well aware of its worst failings, and are working hard to both fix the old system and in many cases, to build new, alternative food economies.

And then the conference started.

A strong opening from the admirable Edie Mukiibi, Vice-president of Slow Food International and one of the leaders of 10,000 Gardens in Africa put me on the edge of my seat. Edie is a vocal and passionate advocate for ‘good, clean, fair food,’ asserting that ‘Africans can feed Africa, not a single multinational company.’ He offered insights into the negative impacts of aid on African communities, and spoke at some length on the flooding of African agriculture with exotic species, such as the Friesian cattle brought in for high milk production. Edie told us that every animal given to a family comes with a payout and a long list of chemicals because they can’t cope with the environment. The list of chemical suppliers follows. The new breeds are burdened with inhumane practices as well. For example, in Uganda a male calf was once celebrated, and raised to a bull or beef steer. Now Friesian bull calves are killed on birth because Friesians are milk machines. Edie finished by reminding us that Slow Meat is a fight for fairness and responsibility, and a fight against industrial agriculture, which he calls ‘careless production’. 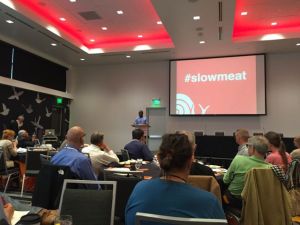 With that global perspective at the commencement, things were looking great. Edie offered us global insights, authentic experience, and challenging ideas.

While I have a strong regard for most of the speakers on the panels that ran over the rest of the day, I feel like they were given the wrong brief. They were preaching to the converted (not to mention knowledgeable), and the promised collective brainstorming and challenging of each other’s assumptions was largely absent from the sessions.

The opening panel had a number of members on it who confessed they don’t agree with Slow Meat’s mantra, ‘eat better meat, less,’ and the floor was given no opportunity to respond. In fact, at no stage was the floor opened up for comment after the received wisdom from those on the stage (though one session took questions via Twitter). Even most of the breakout sessions posited as the smaller for a for discussion and debate ran essentially as lectures.

The first panel, Beef, included Nicolette Hahn-Niman (author of Defending Beef & Righteous Pork Chop), Will Harris (White Oak Pastures), Caroline McCann (Braeside Meat Market, South Africa), Gary Nabhan (author of Stitching the West Back Together). On the question of ‘eat better meat, less’ – the panelists expressed concern that this message might hurt the small farmer who needs people to buy their produce. Others were concerned that it lumps pastured livestock farmers with the intensives, suggesting that eating less meat across the board is what’s needed, when really people just need to stop eating factory-farmed meat. None that I heard defended the position to eat better, less.

Well, I’m a small farmer and we say clearly on our website that we want people to eat less meat – just because you found meat that’s raised properly doesn’t mean you should eat it with abandon. We cannot export America & Australia’s (or indeed the global north’s) meat consumption without utterly destroying the planet and ruining our children’s hope for a future. Meat raised responsibly is a delicious and nutritious part of any diet, but too much will still over tax the planet’s metabolism.

The farm to table tour of Black Cat Farm near Boulder, Colorado, a vibrant, vertically integrated mixed livestock and vegetable farm practicing what they preach. Eric and Jill Skokan have developed a thriving agroecological system that supplies their two restaurants and multiple farmers’ markets in their region. As Eric took us through the polenta he’d ground from their corn crop for the corn bread using his grandmother’s recipe, served alongside a lovely roast pork leg from one of his rare breed Mulefoot pigs and an array of other dishes grown and cooked within 20 metres of the table, his passion and satisfaction were visceral. This is Slow Meat. 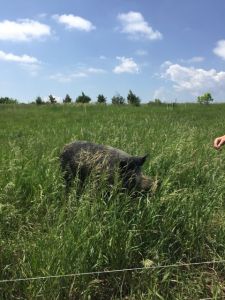 On the Beef panel, Will Harris of White Oak Pastures shared with us that in his system, beef adds 30% to costs over industrial beef, whereas poultry adds 300%. He pointed out that the smaller animals too easily lend themselves to more industrialised systems. He left us with a little bon mot over the biggest meat company in the world, Brazilian JBS’ recent acquisition of a grassfed company– ‘I hope they don’t fuck that up’, said Will. Right.

Another highlight was the presence of Craig Watts, Perdue whistleblower, on the Chicken panel. Craig shared his experience as a contract grower for the huge intensive chicken company with a frank fearlessness to be much admired. He told us how the company lures people in to grow for them, telling them, ‘you’re going to be out of debt in 10 years and you’ll always have a market.’ And then he asked, ‘is the food coming out of these huge operations: sub-standard, making people sick, and causing superbugs?’

Craig told us that in rural communities Perdue (and others like them) have a monopoly – Craig can only sell to them, & Craig gets all his inputs from them. Remember that description of Tyson with which I opened? Craig finished by reminding us that just days before we gathered North Carolina (where he lives) passed an ag-gag law, making his important whistleblowing activity potentially illegal.

Craig’s honesty and earnest engagement with the delegation was heartwarming and heartbreaking all at the same time. And again delivered the authentic voice we were gathered to hear and address, I thought.

The final major highlight was easily Temple Grandin, who spoke at the Slow Meat Fair the day after the symposium. Temple held the floor rapt with her long, deep knowledge of the meat industry and focused efforts to improve animal welfare pre and during slaughter. She stated without hesitation that ‘you cannot overwork and understaff’ and expect good outcomes. She said she now sees more problems coming into slaughter such as leg confirmation and lice than she used to as systems have intensified, and single traits have been overselected with their attendant undesirable traits (eg a large loin on a pig may be linked to higher aggression). On overly burdensome regulation, she asserted ‘don’t dictate stun box floor area, measure outcomes’. Amen. 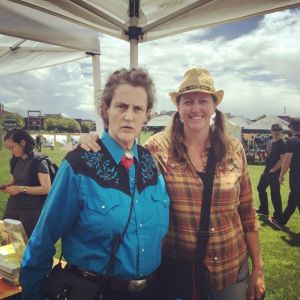 With the day structured by three species – Cow, Chicken, Pig – I thought we would methodically canvass the major issues facing the production, processing and consumption of each. On beef, I wanted to debate the role of supplementary feed, be it hay, sileage or grain, and what is a truly regenerative practice. On chickens, I wanted to hear others’ thoughts on what a truly regenerative pastured chicken operation looks like – including a debate about breeds – and grapple with the question of how much chicken is possible if it’s only grown in truly regenerative systems? On pigs, I wanted to talk about soil – it’s great that we all have our pigs out on the paddocks now, but are we moonscaping it? Does it matter if we are?

Will I go back to Slow Meat in 2017? Probably. Do I hope they get the programming right and deliver on the promise to bring us together to work collectively for radical food system change next time? Definitely. Do I feel enriched by the people who did attend, and am I grateful to Slow Meat for bringing us together? Absolutely. 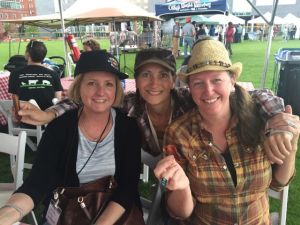