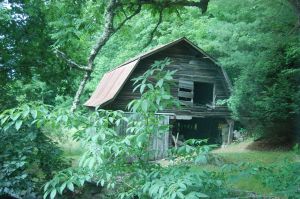 Road Trip USA was envisioned to serve a number of purposes, one of them to visit small, rebel farmers who are concerned enough about the impact of large industrial agriculture to participate in system-wide change through sustainable practices on their own farms. Those we have visited have been generous with their knowledge, and certainly fit Joel Salatin’s criteria that farms should be ‘aromatically and aesthetically pleasing’ – I’ll be posting on some soon…

The first farm we visited was in fact Polyface, which I’ve already detailed. It is a wonderful place, and an inspiration to many new and aspiring farmers such as ourselves. Salatin is not just farming, he’s also combating complacence and acceptance of industrial agriculture as normative through his many books, workshops, and what seems like a lot of time on the lecture circuit. I recommend reading a great post over on ‘Good Cooking for Hard Times’ that outlines some of the consequences of our faith in industrial ag and gives further detail to Polyface. 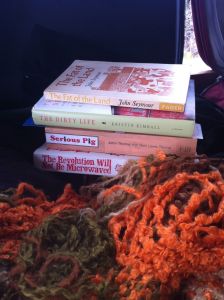 But I should begin at the beginning. For Road Trip USA, we packed the essential reading for our continued research into sustainable farming, then prepared ourselves for the Land of Processed Food.

When we encountered initial difficulties with the RockVan, you can imagine our surprise in the rather uninspiring town of Springfield, Virginia to find a little diner promoting itself as ‘Farm to Table’ just around the corner from our freeway hotel. 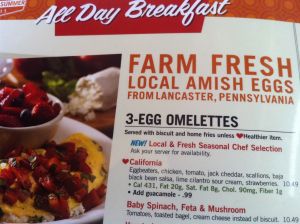 Turns out the Silver Diner is a regional chain that is ‘locally owned and operated’, and while it’s nice to see the interest and effort around sourcing produce locally, I’m really not sure about the ‘natural’ claims nor their ethical credentials after checking out their egg and milk suppliers. 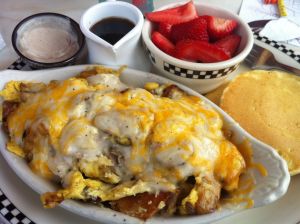 The food we were served fit the bill of most chain fare in the States – large servings smothered in cheese, tasting of, well… fat. Vegetables were in short supply, the pancake breakfast managed to look as though there’s nothing local or natural about it – just what people want, right? I don’t want to knock Silver Diner for trying, but I was struck by how the commercial imperative to cater to the mainstream desire for sameness and quantity seems to be hampering their efforts at really tapping into the ‘farm to table’ movement. Less generously, these people are opportunists dressing up (relatively) local produce as ‘natural’.

But that’s just the first day.

As we’ve traversed thousands of miles across this vast, beautiful country, two of our most common interactions with food and agriculture have been amongst farmlands and supermarkets. Restaurants, while revealing what people eat outside the home, don’t tell you as much about their everyday existence as supermarkets do, and while supermarkets completely obscure their products’ sources, just drive through rural America and you’ll see the often-sad source for yourself. 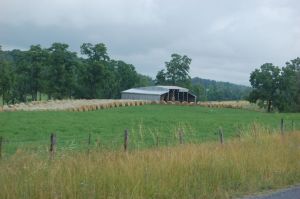 Much of what we’ve seen evokes a bit of the nostalgic rural idyl – neat rows of corn bursting green across the horizon, the glimmer of red capsicums peeking through deeply verdant fields, circles of golden hay tidily surrounding a homely barn. In Pennsylvania, Virginia and North Carolina, it’s the cavernous old barns in varying states of decay or fresh repair, and if the mid-South is barns, Texas is windmills. 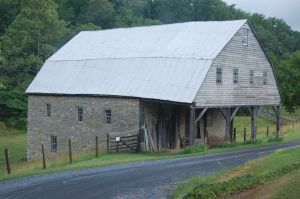 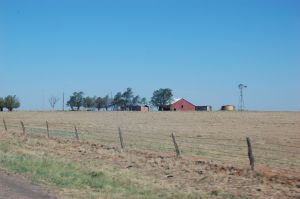 Yet if you drive through these fields day after day, week after week, and you have your sustainable and fair-trade agricultural lenses on, what you see is monocultures, dead and dying soils, rubbish-strewn poverty in small farming communities and field-workers’ cottages, and pastures decorated with billboards advertising casinos or treatment for Lupus. 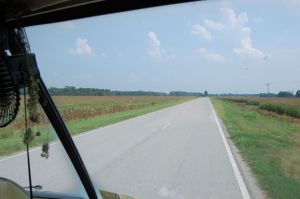 The Mississippi Delta’s relentless monotony of cornfields made me wonder at the outcry against palm tree plantations in Malaysia, when our own backyard is so untidy. Not that I’m suggesting we shouldn’t protest the destruction of rainforests for monocultures, but that we should scrutinise the practices of our own countries more closely (who, of course, are also hugely reliant on palm oil for the gargantuan processed food industry). In case the monocultures don’t give you a touch of dysphoria, there’s the poverty – from run-down trailers to shotgun shacks held together with little more than a Southern Baptist’s prayers, rural Mississippi (which is pretty much all of Mississippi, the poorest state in the US) is poor – like, Flint, Michigan poor. 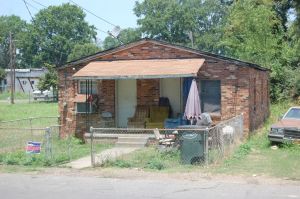 In Mississippi, what really struck me was the exploitation of labour, as it was pretty obvious that it wasn’t the farm owners’ houses we were despairing at.

But when you get to west Texas, where broad-acre cotton and wheat dominate the landscape, it gets harder to tell who owns what, and our sense was that the mid-sized family farms were the ones under enormous threat from long-term unsustainable practices and the current drought. 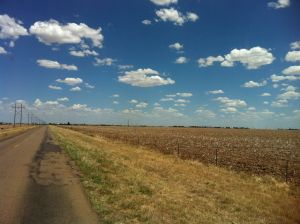 There’s spirited debate amongst the farming community here over when they can start calling it of a scale of the Dust Bowl of the 30s, but whether what we’re seeing is that bad or not, it’s very very bad. Whole wheat crops have been ploughed under, cattle sold early, and grain elevators gone bankrupt.

Even the rivers have up and left the state.

The detritus of industrial agriculture gone wrong is everywhere – from dead soils to deserted farmhouses, the dust devils are closing in.

But from wind springs new life, and just across Interstate 40 from the sad and stinking feedlots outside Amarillo are some of Texas’ many wind farms, a hopeful backdrop to the crumbling disasters of industrial agriculture in America’s midwest. Even the private oil derricks seem relatively harmless as they dredge the last of the land’s lifebloods from under its withering skin.

Yet many argue we must have these monolithic systems in order to feed the world. But what that attitude has given us is a system so broken farmers pay enormous sums to Monsanto to grow tens of thousands of acres of Round-Up-Ready corn to feed ruminants who live out their lives in malodorous CAFOs so we can have 24oz steaks on our plates – in Amarillo your super-sized steak is accompanied by the smell of their excrement in the feedlots just west of town.

And I will point out the obvious – we’re over-feeding the so-called global north, or what used to be called the First World, where now we’re mostly just first in diseases of affluence.

In many of America’s supermarkets, you can’t miss the ‘mobility scooters’ as you collect a trolley. The prevalence of obesity in America is no secret, and the majority of those we’ve seen using the scooters have fit the description. I’m not remotely interested in joining others in fat-shaming – I see no shame in obesity, just higher risk for disease and a diminished quality of life. Yet I can’t help but ponder the motive of supermarkets full of 85% highly-processed food in providing mobility scooters for their customers?

Once inside, you could follow Michael Pollan’s advice and stick to the outer aisles and produce section. And regular readers of my blog will know we go a step further and avoid big chain supermarkets entirely, but for the purposes of research and creativity, we’ve not only gone in, we’ve gone deep.

It starts with a game – try to find a food you know in its original form. Butter? No – oh, wait, yes, some.

Rice? Sure, but almost all instant and flavoured. Cheese? Over there in the dry goods ‘shelf-stable’ area. 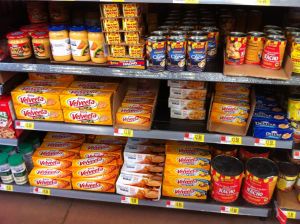 Yoghurt? Of course, but I hope you don’t mind artificial flavours and sweeteners, and of course you’ll be delighted it’s all fat free. 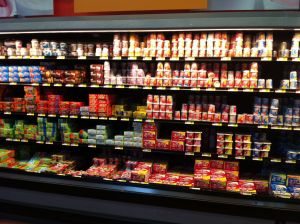 Right, so dairy is fat or even dairy free, rice is instant and ‘value added’, and there are typically 3-4 times as many processed meat products as whole. And that’s mostly around Pollan’s supermarket periphery – you should see what’s in the middle. Oh, you’ve been there? So you know there is nothing whole in the middle – it’s entirely made up of ‘ingredients’ created by the wonders of science to befuddle our senses into thinking it’s actually food, marketed as healthier than what we might grow in our own backyards.

The fabulous Zoe recently said on Progressive Dinner Party, ‘I don’t accept that the leap from wheat kernel to bread is the same as the leap from bread to McDonalds‘.

It’s not full-cream dairy making you fat, America. Putting excessive amounts of ‘cheese product’ on highly processed meat products wrapped in highly processed ‘bread’ products served with a side of… well, I don’t know their scientific names… yeah, that and the super-sized sodas and high-sugar cereals, that might make you fat. When even the deli potato salad has High Fructose Corn Syrup (HFCS), you’re going to get fat. 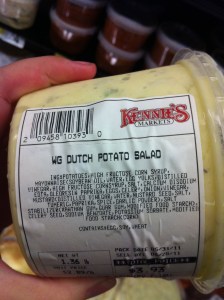 These processed foods will make us all fat while we blind ourselves to the exploitation of workers who grew and harvested the ingredients that made these ‘foods’ whose origins are no longer recognisable nor traceable. Meanwhile, the workers will continue to die the illnesses of poverty and over-exposure to chemicals, and everyone will get fatter and sadder and act like nobody knows why. And more farmers will continue to leave the land because where is the dairy farmer’s dollar in a product so ‘value-added’ by others down the supply chain it’s no longer primarily made from milk anyway?

Surely the fact that we can eat at the Silver Diner should make us happy? And not having to grow our own tomatoes, add seasoning to our rice, or fruit to our yoghurt – no need to pop our nachos in the oven to melt the cheese? Isn’t it marvellous that we not only don’t have to bake our own bread, we don’t even have to slice it? Those benevolent corporations will even boil your eggs for you.

Industrial agriculture has made all of us so much happier, hasn’t it? I mean, just look at these tomatoes, right? 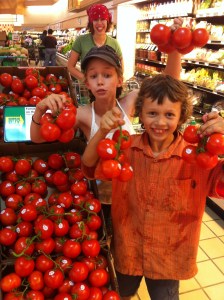 This post is linked to Fight Back Fridays – you should check out some of the other Food Renegade posts!

The towering grandeur of the Rocky Mountains are justifiably famous, but when one hears of the Appalachians more often than not it’s accompanied with a chuckle, a  “isn’t that Deliverance country?” quip and perhaps a knowing comment about duelling banjos. With my west-coast lenses, I even figured it was no big deal to drive straight across them the day after our new brakes and distributor were ready for what was meant to be a probationary run.

It’s a good thing the 34-year-old RockVan was up to the task, because it was a monumental one. The Appalachians are wickedly steep and curvy even if by Rocky standards they aren’t that high. They are also intensely, deeply and gloriously green.