Polyface. It’s a name that initially sounded a bit wrong to me – I’m thinking ‘two-faced’ here – but one that we hold in our non-Cartesian selves as ‘Mecca: √’. 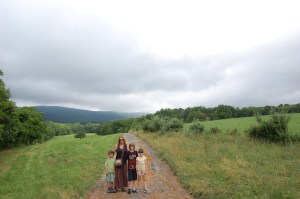 It really starts in the beautiful historic downtown of Staunton, Virginia, where a couple of organically-minded cafes and grocers stock Polyface produce. We went into Cranberry’s Grocery and not only secured some luscious Polyface bacon and a big, tender skirt steak, but also organic, unhomogenised milk in a returnable glass bottle and a hunk of raw milk cheese from a local dairy. Raw milk and its products are regulated by state in the US, and the movement seems to be gaining more traction all the time. 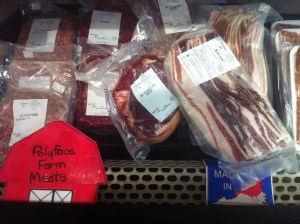 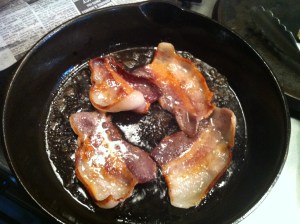 The next morning after a farmer’s brekky of bacon, eggs and day-old sourdough, we drove down locals-only side roads to get to Polyface, which is just a bit southwest of Staunton. As we passed a couple of poultry CAFOs I reflected on what it must have been like for Joel Salatin, the ethical, sustainable pioneer of the region, in his early years as a ‘lunatic farmer’.

Then I got distracted by how beautiful every single piece of land is there, and how much water there is, and how fertile it is… [NB 20 years in Victoria, Australia has given me a slight drought-twitch].

And then we were there. We were actually there! But would it live up to our expectations? After all, Joel Salatin is the man who convinced us (from a stage, unawares) that our dream to move to the bush needn’t only be a self-sufficiency opt-out, but one that could help us be part of changes to the food system through contributions as primary producers, and the capacity to earn (some of) a living while doing that. 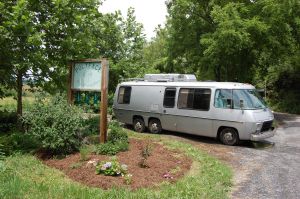 Stuart has read many of Joel’s books, whereas I, mid-PhD, have only skimmed. As we walked around the property he captioned my view, which was an excellent substitute for a personal tour by Joel, which is currently not an option (I think largely do to over-popularity and his need to farm!). But Polyface has an open-door policy – anyone can come onto the property and wander around to see how they do things – and the farm shop is open Mon-Sat 9-12 (and into the afternoon on Saturday).

We wandered in, unsure of where to start, as the many structures have a similar aspect of charming rural decay – Stuart reminded me of Joel’s credo that a farm that’s too tidy is probably not profitable. Judging by what we saw, the Salatins must be doing okay. 🙂 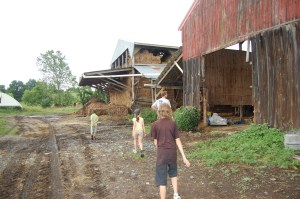 The first hoop house had rabbits and chickens working together to create fertile soil for planting while fattening up for the table.

Next we found one of the many barns with the cows’ feeding system on pulleys next to stacks of hay. They winter the cows here, throwing layers of mulch in with the cow manure and sprinkles of corn occasionally. In spring, the cows head out and the pigs come in to turn it all, making a rich compost for crops. Talk about harnessing the power of your livestock.

We found some of the pigs in one of them doing their job, or perhaps taking a little break from it… 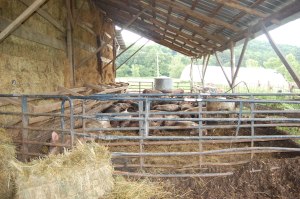 Nearby we found a couple of sows with their new litters – they farrow in large pens with plenty of nesting material (hay), which not only creates a warm, cosy environment for the new piglets, but makes them less susceptible to crushing by careless new mamas, as was explained to us by one of the former Polyface interns. 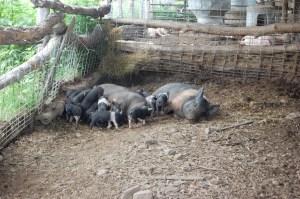 Next up, a stroll out into the paddocks to see the meat birds – turkeys and chickens. The young turkeys were contained with mobile electric fencing, and the chickens in ‘tractors’ that are moved regularly to fresh grass. As with any such system (we’ve had the same in our suburban backyards for over a decade), the chooks eat bugs, and weeds and fertilise the soil while getting much of the omega-rich grass into them that gives free range eggs their distinctive deep orange yolks.

I loved the ‘eggmobiles’ in the middle of the fields with their noisy, happy layers in and around. It’s a clever system, and one we look forward to implementing on Jonai Farm. 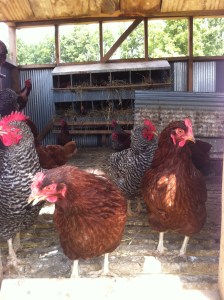 Another highlight was seeing the pigs out in the forest, where as with pasture pigs, they’re rotated regularly. These are very happy pigs, let me tell you, which certainly explains that delicious bacon.

In one of the structures we found the farm cook – he’s here for four months a year to feed all the hard workers a hearty dinner, usually 24 or 25 people a night. That day he was cold smoking some bacon on the mobile smoker, a huge contraption he told he us he also cooks whole pigs on. Yet another good design for us to implement in Eganstown…

We did get to meet Joel briefly, having seen him zooming around in his famous hat on an ATV directing the farm’s many activities earlier. I told him ‘hello’ from Alla at the Lakehouse and that she’d said, ‘may your carrots grow straight’, which is one of Joel’s blessings. He offered his blessings back to her and the Daylesford community, and smiled to hear his influence on us. I gather he hears that a lot actually, as he handles fans like us with affable humility.

We bought each of the kids a Polyface t-shirt (we rarely capitulate to such requests, but this was Polyface!) about the ‘pigness of the pig’ and being ‘future lunatic farmers’.

Mid-tour, we headed back to the RockVan for a quick sandwich of Polyface ham, raw milk cheese and lettuce from Nate & Lizzie’s neighbour in Front Royal they’d given us as a parting gift. After the overwhelming amount of industrial, processed food we’ve seen (and eaten) on this trip, it was a very homely and grounding meal.

As we approached the farm shop for a few more delectables, we found a crew of local farmers and Polyface interns just finishing the morning’s chicken butchering – 360 birds that day. Unlike so many kids (and adults) who can’t bear to think of where their food comes from, Atticus immediately asked if we could have chicken for dinner. 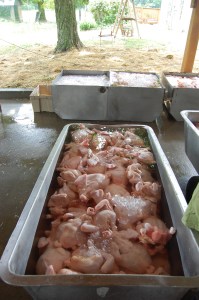 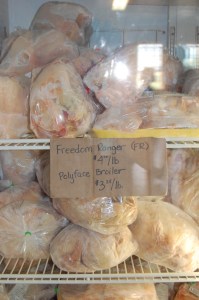 We bought one of the ‘Freedom Rangers’ already cut up, as I don’t have my cleavers with me, and enjoyed a spectacular dinner of fried chicken up high in the Blue Ridge Mountains. 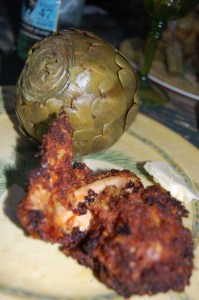 Joel’s philosophy that ‘food production should be aromatically and aesthetically pleasing’ is certainly evident at Polyface. Another bit of wisdom came from Atticus after we visited the pigs in the forest, when he remarked, ‘Farms are about two things: food and fun.’ So long as we keep framing plenty of hard work as fun, I think we may indeed be raising our own ‘future lunatic farmer’. 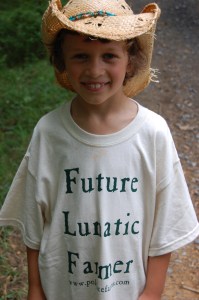 9 thoughts on “A Happy Day at Polyface Farms”