Okay, folks, I’m going to say some controversial things now about history and culture. The historians and others with a keen interest in monuments of the past might take umbrage. A caveat – I’m a great admirer of antiquity and believe there are compelling reasons to study it and immerse oneself in ancient ruins. But I’m a cultural theorist, I focus on everyday life, and this trip is reminding me of some of the reasons why I chose to do this. Are you ready?

I’ve now been in three beautiful Italian cities, and in each I have felt completely enveloped by the past, but deeply engaged with the present. Of course, I’m here to research the present, but also the past, that is, what were the traditional dishes, mealtime habits, preparation methods when the biggest waves of Italian migrants were moving to Australia, and what are they now – how have things changed? To do this research, I have to talk to as many people as I can, sample as many dishes as possible, and wander as many markets as I can find. (NB Yes, I realise I have the best PhD ever and I’m ‘lucky’ and I will remind you all that luck is where preparation meets opportunity, and I seized mine when the idea arose. ;-))

While here, I sometimes feel like a tourist, and surely in some sense I am, though I am legitimised by having a scholarly mission. And of course I am sometimes surrounded by tourists, especially in Roma, which was awash with vast crowds of them. While in Bologna, where there are few tourists, I first thought about how the Bolognese conduct their modern, daily lives amongst such stately medieval grandeur with hardly a thought, it seems. While I would stop to gaze up at the frescos in the portici, they would stride purposefully by – their city’s history is just part of the landscape, a comfortable old blanket much beloved but hardly noticed as one sits down to read a book on a cold winter’s night.

After a few days, I realised I had not even considered entering any of the magnificent old churches, and I had a pang of guilt. But then I thought about how I would not learn about the daily rhythms of these people by wandering solo through their ancient religious houses, and I was here to learn those rhythms – entering the churches would in fact turn me into a tourist, and distract me from the task at hand. I carried on with my eating, talking and watching on the streets – the architecture a backdrop for the quotidian movements of the fair denizens of Bologna. I even made a note to myself that, ‘I want to feel the city’s pulse, not explore its cemeteries… I don’t need to enter its tombs, I need to find its living.

And then came the unexpected detour to Roma (it’s a long story that involves two busy parents who failed to lodge Oscar’s passport application before my departure, necessitating an emergency trip to the embassy in Roma so I could sign a form in front of a consulate officer – #adminfail #bureaucracyfail). I had no intention of spending time in Roma – was quite happy that my trip would be in smaller cities that would not be at the height of their tourist seasons. My view of the Italian capital was surely somewhat affected by a) the unforeseen bureaucratic debacle that led me to cancel flights, book a hotel and jump on a train; b) my desire to be in smaller cities; c) the fact that I despise crowds of tourists, even if I am but one more of their number.

So, Roma. At @orientalhotel’s advice, I went searching for the Campo dei Fiori for the market there. I was last in Roma 19 years ago, so I felt obliged to march past some of the monuments on the way – I went by the Colosseum, the Roman Forum, the Pantheon, and the Trevi Fountain. They remain tributes to a long, rich history, and marvels of architecture and engineering. I took some of the mandatory photos. I shouldered through tour groups following guides with coloured ribbons hoisted on sticks with my teeth clenched.

The market at Campo dei Fiori was very grounding. I wandered through the stalls, gazing at the riotous life of the vegetables, bumping against locals doing their daily shopping. My forehead cleared, my shoulders lowered, and I found a little cafe just out of the way with no tourists and wood-fired pizzas. I spoke with the padrone – who was, of course, Sicilian (many seem to be?), and who graciously gave me some advice on where I must go for a certain wine, a certain dessert… interesting that his tips were immediately about food, even though I didn’t mention my research.

As I passed through the teeming hordes at the Trevi Fountain later, I actually had to fight tears at how much I was detesting the theme park feeling of everything. It felt impossible to have any sense at all of the rhythms of the Romans during this height of tourist season – instead even the diverse nationalities of the throngs were homogenised into a single category of Those Who Seek Monuments and Take Photos of Themselves in Front of Them. When they eat, it seems almost incidental, and I’m sure most aren’t even aware of how poor a representation of Italian food they are eating in the many clones of ristoranti proclaiming to have ‘Real Italian Food’ (Note to tourists: you’re in Italy, if they need a sign to say they have ‘real Italian food’, they probably don’t). The food at those ristoranti, by the way, reminded me a lot of the generic ‘Italian’ food sold at many restaurants on Lygon Street in Melbourne, though there is an increasing supply of quality, contemporary, regional Italian food on offer in our capital cities.

I don’t know what interactions the tourists might have with locals, but I suspect it’s only with service staff – which, admittedly is a problem for most travellers – how to penetrate the self-contained extant social groups of the locals? My thoughts on dining alone and Michael’s on why don’t we break down more social barriers when sharing a table in public explore some of those ideas.

This story ends in Palermo – I could not have chosen a starker contrast to Bologna’s understated elegance and formality than here. Palermo is steeped in its own rich cosmopolitan history and the crumbling, ornate palazzi are as visually rich as Bologna’s medieval austerity and Renaissance charm. The splendid chaos of its architectural mix – Byzantine, Arab, Norman, Renaissance and baroque – is matched by its multicultural population, and here passion is palpable. Beware the woman who catches a Siciliano’s eye – a warm grin, ‘ciao bella’ and intentful gaze are the consequence.

In Bologna the stranger is largely unnoticed and might have very few social encounters, leaving her to move silently from one church to another, and in Roma, the stranger is so common as to be perhaps disdained, and moves in herds between sites of antiquity that have very little feeling of connection to the city’s present culture – again, just a backdrop for a busy modern life. In Palermo, the stranger might attempt to move unmolested between monuments, but the narrow footpaths, frequent markets, and flashing eyes are unlikely to let you miss its pulse. Here, the walls are literally alive with vines and flapping laundry on its many little balconies – history is ingrained in the daily rhythms. 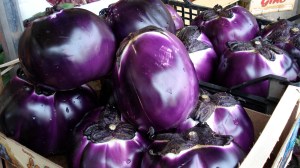 The markets in Palermo are a real joy – extensive stalls of colourful produce, masses of fish, loads of beautiful olives – the stallholders shouting across to each other and laughing in baritone. And in every little cafe or ristorante, chances are strong that a local will say hello to you, ask where you’re from, and then tell you how they’ve a) been to Australia b) would like to go or c) have relatives there.

I walked into the Cathedral, because it was there. I sat down in a pew and tried to reflect on my reticence to visit these beautiful monuments, hoping for divine inspiration. I watched the tourists flowing in and out, some quiet, many chatting, some on the phone, all taking photos. And then it happened, I got my sign… a man dashed in, head jerking about looking manically to see what he ‘needed’ to see. He stopped dead centre, took a quick photo of the altar, turned on his heel and dashed out, still manically trying to catch what little he could at speed. What has he learned? What has he gained or contributed by this spot of sightseeing? Not a lot, I will presume to say. I hope he then went and meandered slowly through the market, enjoying the excellent street food and chatting with the locals about their favourites, but I doubt it.