Back from endless travels and feasting our way through Tasmania, our normal Farmers Direct milk delivery started up again. We love the convenience of the twice-weekly delivery, which means we never run out of dairy at inopportune times. But then, the day after our big delivery, the kids were unexpectedly invited to shelter from the scorching heat for two days in their grandparents’ pool. This, of course, meant more productivity for Stuart and I, who are both working from home this year, but it also meant more milk than we knew what to do with. Or did it?

I live for the occasional milk glut, when I can make paneer, as it’s a high milk to cheese ratio (you only get a litre of cheese for four litres of milk). But Stuart mentioned yoghurt, and squeeeeee! We were away. I got the recipe from Sandor Ellix Katz’ Wild Fermentation. (I also made paneer and Stuart attempted to make mishti doi, which didn’t set, probably because he jiggled it while it was setting.)

Heat the milk slowly in a saucepan to 82C (or just under the boil), then allow to cool to 43C (which is where you can just keep your finger in the hot milk). Mix in the tablespoon of yoghurt (I used Farmers Union Greek Style) and pour into a preheated glass jar. NB I only made 500mL due to our desire to make the other dairy delights.

You should have pre-heated an esky (unless, like @tomatom, you have access to an Aga to keep it warm), either with jars of hot water or with hot water poured straight in. I foolishly used our large esky, which meant it took a stupid amount of water to heat it up – I used it on the garden the next day, but next time I’ll use our smaller esky and I’ll just pour the water straight in and not bother with the jars.

Place the yoghurt in the warm esky – I kept mine pretty warm, probably around that 43C mark – and leave it for 8 to 12 hours. Don’t move it, as it likes to be quite still to set apparently.

Next thing you know, you’ve totally made yoghurt! It’s so simple, and so exciting! Mine is sourer than even our favourite Greek style, but I like it that way. I’m now so inspired I plan to try mozzarella – @littleredhen has inspired me and I’ve been watching @beeso’s cheesemaking over on the Twitterz with envy for a year now.

This post is also part of Fight Back Fridays over on the excellent Food Renegade site! Check out the others! 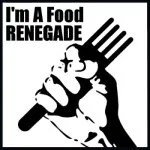