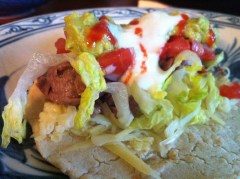 I’ve been making tacos and burritos at home for a very long time, and it was with great delight I went on a hunt for a tortilla press on our recent Road Trip USA (I came home with three – two for me and one for Zoe). Now that I have the presses, plus access to instant masa flour from Casa Iberica in Melbourne, corn tortilla making is very simple indeed.

So it was rather amusing that as I was making tacos de carne asada the other week food writer John Lethlean tweeted a request for a recipe for soft tacos. @FlavourCrusader put me forward, which motivated me to write out my recipe. With the current craze for all things Mexican in Melbourne, I hope this helps all the home cooks see what the fuss is about.

For the tortillas, mix masa & water and knead until a smooth dough – this doesn’t take long. If too dry, add a bit of water – should be slightly tacky but not sticky. Roll into 16 balls and cover with a damp cloth until ready to cook.

When ready, place baking paper on press, put ball in centre and press flat, then place tortilla on dry hot griddle and cook until brown spots appear on both sides. Keep warm in a tea towel until serving. If you don’t have a tortilla press, these are easy to roll out with a rolling pin.

For the carne asada, squeeze juice of limes (I typically use 2 for one steak) over steak, add pepper, cover and set aside for an hour while steak comes to room temp. Just before grilling, salt liberally, then grill to taste (we like it med rare). Rest for a couple minutes before slicing thinly.

For the pico de gallo, dice tomatoes, red onion and chilies and mix with coriander and lime juice. It’s best done at least half an hour before serving to develop the flavours through the tomato. We often leave the chilies out for the kids and just add Tabasco at the table.

We like the simplest guacamole: mash avocados with minced or bashed garlic (1-2 cloves to 2 avocados), add lemon juice, salt & pepper to taste.

You can either construct them in the kitchen and bring them out on plates served with frijoles or Mexican rice, or let people construct at the table. The order for us is usually: tortilla, carne asada, white onion, pico de gallo, guacamole, coriander. Sometimes we add a bit of homemade yoghurt (which we use instead of sour cream for pretty much everything), and we usually let everyone opt in or out of the coriander. Thinly sliced purple cabbage is also a delicious addition.

This entire meal, though it includes a number of separate processes, can take less than half an hour to prepare for a family of five! It’s a Jonai staple. 🙂