Presumably most of you have noticed that the Tour de France has been on. Given my recent work travels, my exhilarating participation in the democratic process of establishing a new peak representative body for international students (#allhailCISA), my usual family demands with the Jonai (who are orsm not only in my view, but by global consensus), and my public disavowal of all forms of spectator sport, I really haven’t. In fact, when someone said ‘Lance Armstrong’, I had an immediate case of deja vu/wait, what? But some time ago, I agreed to post something about the destination of Stage 12 of the Tour de France when the lovely Barbara of Winos & Foodies asked for people interested in posting something on the food of particular regions…

See, as my few regular readers will know, Tammi Tasting Terroir is meant to be about understanding, considering, eating and critiquing regional distinctions, variations, meanings and instabilities. So when Barbara asked who was interested in a project about such regional distinctions I think I might have extinguished a star as my hand shot up. But wait, it has to be about France? Hm, my research is about Australia, Vietnam & Italy, but sure, why not? It’s not like I don’t know how to do research… (increasingly, don’t you just ask the twitters?) <hopes her supervisor isn’t reading this>

Tami (one ‘m’, clearly not me, but an interesting confluence nonetheless) over at Running With Tweezers did a gorgeous post on tapenade, tomatoes provencale and roasted apricots for Stage 11, which you should definitely pop over and drool at.

So it’s lucky that I ‘ve been to France. In fact I’ve been thrice. I went with my family at 14 (please don’t ask them for the 4th of July story on the Orient Express), fell in love with Stuart in Paris while working as an au pair to earn enough money to survive (recounted briefly in this poem that is of no interest to anyone except us), and finally, with my entire American family plus our then 5yo, 3yo, & 3 month old children, mostly in the south. And that’s when we made it to the Languedoc region, which is where Mende is, which is where Stage 12 of the Tour finishes this year…

So what do you want to know about Mende, the Languedoc region, and its foods? Well, the critical dish we’re going to discuss here is cassoulet. Of course the region is also famous for its duck confit, and I could tell you about those I’ve made and those we’ve brought back from France in tins, but I’m not going to do that here… According to my much-beloved French sister-in-law, one of the things that makes cassoulet famous is that it takes three days to digest. 😉

So here goes – I’ve made cassoulet a few times, and it’s pretty hard to stuff up if you’re paying any attention and using plenty of delicious ingredients. The catch is that I’ve been urgently called to Sydney on work (and obviously I should have written this much earlier, but to be fair, I only just got back from two days on the Gold Coast – speaking at a conference – and a week in Tassie setting up CISA and researching the ethical raising of pigs. Okay, we also ate a lot of Bruny Island Cheese).

What this catch means is that I’m cheating a bit. I’ve made cassoulet, I’ve eaten plenty of it, and now I’m going to give you a recipe I’ve drawn together from my memory of making it, and recipes I’ve read/tasted/imagined/enjoyed and ask you to make it yourself. 🙂 I’ve crowdsourced photos from lovely food bloggers on the twitters (who enjoyed the versions below at Libertine, written up here by @tomatom) since I’m unable to cook it up here in the hotel in Sydney. I’m now tempted to make it for friends on Wednesday night, so will update with photos if I pull that off… 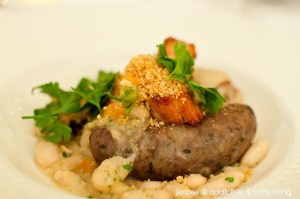 This photo was taken by the fabulous Penny (@jeroxie) over at Addictive and Consuming.

This hearty stew varies considerably in different regions (and even within them, as per any famous dish made in various households), and it’s fun to imagine the many spirited debates southerners must have about the requirements for pork, quality pork sausage, lamb or duck confit. Personally, I reckon you simply cannot go wrong as long as there is free range happy pork (‘only one bad day’), sausage and duck. Yes, I realise that means this is a very rich dish – that’s the point. And how fitting that I am offering it to you here in Australia’s depth of winter, as I cannot imagine it having any appeal in the current French summer!

1kg haricot (cannellini is fine, a variety of haricot) beans

2T tomato paste (you can also use homemade roast sugo, in which case double quantity)

Soak the beans overnight. Drain and put on the heat for 10-20 minutes, until soft but still al dente. Take off the heat, drain and set aside. Meanwhile, you should be making a stock from the trotter, garlic, onion, thyme, bay leaves, carrot & celery. Simmer in water for at least two hours to infuse the stock with loads of flavour. When you’re satisfied the stock has a lovely flavour, it’s ready for its next starring role.

Meanwhile, fry the duck pieces just to brown and seal in delectable juices. Also fry off the sausages. You can then slice them and add to the beans or else leave them whole – this is purely a matter of your taste and aesthetic. Set the duck and sausage aside while stock comes to maturity.

Once both the beans & the stock are ready, and the meat is browned, layer roughly, including the bacon pieces, in a casole, or a casserole dish or oven pot of some sort, ensuring some sausage is pushed in at the top. It’s useful to put the trotter in the bottom for more flavour. Pour half the stock in when you’ve half filled the pot. Stir the tomato paste or sugo through.

I use my le Creuset (I should mention I have one that was a gift, & another that was found in the hard rubbish collection in Carlton – it has exactly *one chip* in the enamel in the bottom, but somebody threw it out – lucky us). Pour the rest of the stock into the pot, cover and put in a medium/low oven for around three hours (150-160C). Uncover after the first hour and allow the top to form a bit of a crust, cooking for a further hour or two, pushing the cassoulet down with a large spoon periodically. Pour more stock in during cooking if it dries out too much.

Some people put bread crumbs on top to form the crust, but my understanding is that it’s more traditional to allow the beans and sausage to form their own crust by slow cooking uncovered at the end. 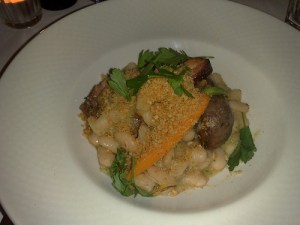