Before arriving in Sicily, I’ll readily admit that all I really knew about the region’s fo

od was to expect an emphasis on quality seafood and influences from north Africa and other cuisines around the Mediterranean. So I expected sardines, anchovies

and octopus, cous cous and saffron, and of course arancini, calzone and cannoli, not to mention plenty of olives and legumes, and the ever present eggplant and tomatoes.

What I didn’t expect is the wonderful culture of street food (il cibo di la strada), and the variety of offal, nor the gusto with which all sorts of Siciliani approach it. I could almost be in Vietnam with the tasty diversity of rosticceria – the name comes from arrosti, or roasted, but from what I’ve seen in Palermo most seem to be fried? (in Palermo these foods include arancine, panelle, calzone, croquette, sfincioni…).

You can eat these things in the little shops or next to the stalls selling them, or walk with your food, such as while strolling through the plentiful markets.

I was lucky to have Alessio, the brother of a Sicilian friend (Danilo) I made a few months ago in Brisbane to be my guide.

spleen cooked in lard) for dinner my first night in Palermo. It was delicious – none of the coarse texture of kidney or badly cooked liver, this was tender and tasty goodness.

L’arancine are among Sicily’s most famous rosticceria – rice filled with meat, cheese and vegetables, breaded and fried or baked. A rosticceria I didn’t know is panelle – chick pea fritters, with a lovely texture almost like roti bread when you pull them apart. Potato 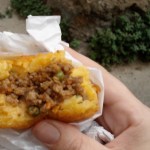 croquettes are a simple and delicious snack at any time, and often sold alongside arancine and panelle.

Perhaps lesser known to those of us outside Italy is stigghiola – grilled goat’s intestines served with salt, pepper and lemon. 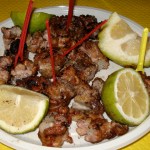 They’re sort of the texture of lamb fat with chewy bits as well, and very more-ish. The stalls and little places selling these will often also sell spiedino – basically kebabs of meats, many with stuffing. We had spiedino with bacon, with panato (not sure what this was?), and one of pork. One had caciocavallo cheese and bay leaves in it as well, which gave a sharpness from the cheese and a lovely, burnt crunchiness from the leaves.

While I say ‘Siciliani‘, really I’m talking about Palermitani food, as Italy has not only distinctive dishes and traditions between its 20 regions, but even within regions. So while panelle are typical of Palermo, they apparently are not common in Siracusa on the east coast of Sicily, a mere 200km away.

Next, the pasta dishes. The ‘most typical’, I’m assured, is pasta con sarde, for which there are a lot of recipes I gather, but the one I had seems to be fairly typical on many menus. I had bucatini con sarde – a lovely thick, long, round noodle with sardines, fennel, saffron, sultanas, pine nuts and bread crumbs. The combination was heavenly, and I enjoyed it at Antica Focacceria di Santo Francesco, a Palermo institution that’s been open since 1834, amongst what appeared to be the glitterati of Palermitano society.

One of the well coiffed women at the table next to me happily scoffed down a panino con la milza, such as I had enjoyed on the street the first night of my arrival. I know I shouldn’t have been surprised to see it on the menu and a well-groomed woman in white pants eating it, but I was. Silly, given I’m pretty sure Rockpool has a famous burger on its menu?

I’ve also enjoyed pasta alla norma – I chose penne, but I gather spaghetti and other pastas are also common. Pasta alla norma is rich with eggplant in a sugo

that also includes salted ricotta (as distinct from sweet ricotta used in various desserts). It is a spectacular sauce and I look forward to making it at home!

Another pasta I had in Sferracavallo, a little town by the sea just out of Palermo, was spaghetti con ricci – a very spiny sea urchin that’s scooped out and made into a sugo.

I found the flavour very intense – it starts with a strongly aromatic sweetness and finishes off with a slightly bitter flavour. I think a small dish of it would have been lovely, but the big plate was simply too much – Alessio and I swapped and I enjoyed the spaghetti con cozze (mussels) instead, which were small and deliciously tender and fresh.

My favourite so far had mussels (though not enough of them), octopus, and seppia (cuttlefish), with carrot and I think radish, in the ubiquitous olive oil, lemon, salt and pepper. Zomigodyum.

And before @CarmR complains about a major oversight, I’ll mention the superb cannoli I enjoyed at Antica Focacceria, and the many granita di limone – lemon ice – I’ve slurped down in the heat of the Sicilian summer. I haven’t sampled other sweets because, close readers will have noticed, I have a relentlessly savoury palate and rarely eat sweets, but sweets are abundant everywhere!

I’ve only written about the things I’ve actually tasted, so of course there will be many I’ve missed. If anyone is keen to mention the other typical street foods I’ve neglected, or other typical dishes around Sicilia, please enlighten us! So little time, so much good cuisine! Buono apetito!