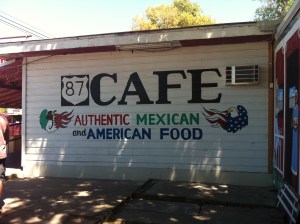 Authenticity measures the degree to which something is more or less what it ought to be. …is it an immanent norm, emerging somehow from the cuisine itself? Or is it an external norm, reflecting some imposed gastronomic standard? If is is an immanent norm, who is its authoritative voice: The professional cook? The average consumer? The gourmand? The housewife? If it is an imposed norm, who is its privileged voice: the connoisseur of exotic food? The tourist? The ordinary participants in a neighboring cuisine? The cultivated eater from a distant one? (Appadurai 1986, 25).

My first job as a recently-arrived Anglo-American migrant to Australia in 1992 was as a waitress in a bistro in Geelong, a provincial city an hour from Melbourne. On the menu, I was delighted to note, were burritos, a food Americans claim as our own. Whilst having my tour of the kitchen, I asked the chef how she made her burritos, to which she replied, “I use large roti bread, fill it with pieces of chicken I’ve fried with some onion, roll it up, and pour béarnaise sauce over the top. Then I serve it with salad on the side.” Aside from raised eyebrows, I withheld my feedback until I tasted said ‘burritos’ at the end of a long shift, “This tastes quite nice, but it’s definitely not a burrito.”

In a short piece On Culinary Authenticity, Arjun Appadurai suggests that “quality is typically the insider’s concern, authenticity that of the culinary tourist. We often admit that there is food that, though inauthentic, is good” (1986, 25). However Appadurai acknowledges that authenticity becomes the concern of insiders “when they (and the food) are far from home. […] The concern with authenticity indicates some sort of doubt, and this sort of doubt is rarely part of the discourse of an undisturbed culinary tradition.” (ibid).

I find Americans in Melbourne often lament the lack of Mexican restaurants, or the perceived ‘inauthenticity’ of those we do have. I myself have indulged in precisely this lament, and in my early years as a new migrant went to some trouble to seek out Melbourne’s Mexican restaurants, which were unequivocally disappointing when the flavours failed to conjure up a taste of home. (The dilemmas of finding ‘my’ food also extended to: a lack of Ranch dressing; unwelcome slices of beetroot on burgers; large, overly pliant pieces of bacon; and milk that tasted ‘funny’, to name just a few.)

I eventually accepted the absence of what I understood to be Mexican food, and subsequently resorted to only eating it at home. Due to a lack of quality tortillas here in the early 1990s, I learned to make my own. Were the tortillas I made at home ‘authentic’? Surely not – I had to piece together recipes from a few whole-foods genre cookbooks, and I don’t own a tortilla press, so my tortillas were inevitably too thick and quite chewy. It is now possible to find edible commercial facsimiles of tortillas for sale even at Coles, though they don’t compare with homemade or California’s ubiquitous locally made versions. As well as tortillas, I make my own refried beans as the tinned version readily available here is, well, depressing.

And yet this story of a search for authenticity has a complicated genealogy. My earliest experiences of burritos were in fast food franchises in southern California, namely Del Taco and Taco Bell. Later, our Mexican housekeeper made us quesadillas almost daily, Mexican style, without vegetables. In my last years in America, I was a fan of the local taquería style burritos, which are typically giant and filled with refried beans, rice, cheese, lettuce, tomato, guacamole, sour cream and red or green salsa and wrapped in aluminium foil.

Thus is the varied landscape of my burrito memories. There were (and are) plenty of other versions of burritos in America, including the ‘wet’ burritos, which must be eaten with a knife and fork, but my core notions of authenticity (which, as per Appadurai’s point, only surfaced after migration) involved the basics of meat, beans, cheese, salads, guacamole and sour cream wrapped in flour tortillas and eaten with your hands. The American versions of ‘authentic’ burritos actually differ significantly from their Mexican counterparts.

In northern Mexico there are burritos, which are made from fillings (typically rice, beans and/or a meat) wrapped inside an unleavened flat bread that the Mexicans call a tortilla. The tortillas can be made from wheat or corn, and come in a variety of sizes. They tend to be smaller than burritos found in the US, where the burritos are filled with an astonishing number of ingredients, many of which are not easily found in their northern Mexican states of origin, Sonora and Chihuahua. With the ever increasing popularity of burritos in America, they have made their way onto menus throughout southern Mexico as well wherever ‘gringos’ congregate, and more closely resemble American versions than northern Mexican ones. I do not have the space here to do justice to a discussion of the process of migrant foods ‘returning’ in hybridised form to the ‘homeland’ as an aspect of the broader process of globalisation, but it is a topic worth exploration in its own right.

My personal hunt for an ‘authentic’ burrito is just one version of identity work played out repeatedly around the world. In my narrative, it is the story of the migrant who unreflexively believes there is an ‘authentic’ essence to a dish from one’s original culture (even if it’s a transplant in the first place). Writing about multiculturalism and migrant tendencies to self-essentialise, Tariq Modood observes that “…when non-Chinese speak of Chinese civilization, their starting point is often that it has coherence, sameness over centuries and a reified quality” (2007, 93) and subsequently argues that sometimes we all speak of our own cultures this way (as per my own migration trajectory).

In my initial searches for an ‘authentic’ burrito, I didn’t clearly articulate for myself or others what that item might really be like if I found it, but I knew that I would know it, by sight, smell, texture and taste, when I did. In 20 years here I have never found ‘it’, but still enjoy (nay, devour) ‘homely’ burritos on every return trip to the States. And in Australia, I no longer pine for Ranch dressing, or American-flavoured milk, and have accepted beetroot, prefer Australian-style bacon, and adore Vegemite and lamb in any form.

Migrants and those recently returned from overseas often experience unsatisfactory encounters with the dish (or dishes) of their memories, and will tend to seek out restaurants run by ‘real Mexicans/Vietnamese/Italians/[insert migrant group]’ in hopes that they have been ‘true’ to the cuisine and can offer one cultural succour and fulfilment of nostalgic desires by matching taste to memory. When this fails, if one is resourceful, one attempts to cook the foods at home, even if they were foods that one traditionally only ate ‘out’ back home, or for which key ingredients were always purchased ready made, such as tortillas in California.

But in my view, arguing about whether something is authentic isn’t very interesting. Rather, understanding what it means to those seeking or producing ‘it’ is my motivation for interrogating the concept. In my experience, it is common for Melburnians to express pride for their/our cosmopolitan city, a melding of cultures where people from all over the globe are living “togetherness-in-difference” (Ang 2001, 14), particularly in the food scene.

Yet there is an obvious tension between the (potential) symbolic violence of insisting on the performance of authentic identity and the associated very real desire to be challenged and stimulated with a multiplicity of ideas, flavours and ways that is at the heart of cosmopolitanism. As I have written elsewhere (Jonas 2008), at the heart of this is a desire for fluency in many vernaculars and to know the world’s many ways of being-in-the-world, which also has the consequence of distinguishing one as possessing a great deal of cultural capital within most fields, whether intentional or not.

So the important question is not whether it’s possible to determine whether something is authentic, but what does the search for it mean to different people, insiders, outsiders and those in-between? And what one finds upon probing is that it is a useful concept by which people assert and maintain ethnic and cosmopolitan identities that allow them to settle homely identities in new lands, or new identities in homely lands. It is a means to achieving social distinction and accruing cultural capital, and it is a way to engage with Otherness as a cosmopolitan principle. It is a way for migrants to strategically mobilise their own ethnic identities in order to accrue economic capital from the outsiders who seek it, and an essentialist assertion that can exclude those perceived to be ‘authentic’ from the project of modernity.

A final rhetorical flourish to highlight the instability of authenticity as a category then – some years ago I asked a focus group in Saigon, ‘what is the essential ingredient that makes phởauthentic?’. One woman responded, ‘MSG’.