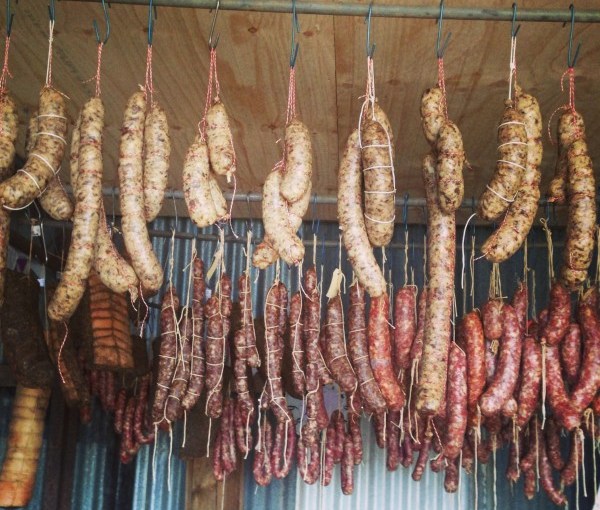 This is the first of what I aim to be a series on the negative impacts of food safety regulation on small-scale production and freedom of choice in Australia.

This first instalment details the story of how Victorian meat regulator PrimeSafe destroyed all our salamis last year. I will seek permission from other salami day hosts to share some more stories of PrimeSafe actively shutting down salami workshops across Victoria (of which I know at least three in addition to us).

Future posts will explain the minutiae of regulation and compliance for small-scale meat, dairy, & egg producers, as well as butchers, providores & chefs with a story to tell – if you have one, I’m happy to host guest posts on this topic.

The late-model government vehicle rolled up the driveway just before 3pm the day before an early-morning flight to France.

As The Inspector stepped out of the car to approach us, she jutted her hand out in greeting, pronouncing, ‘Hi Tammi, Stuart. I understand you’re heading for France tomorrow?’

Taken aback, I answered that yes, we were going to research traditional methods of charcuterie and salumi making in France and Italy. It was obvious that neither PrimeSafe’s surprise visit nor their knowledge of our travel plans boded well for us.

The Inspector asked whether we had allowed participants in our recent salami day to take home salamis from the workshop and we replied that yes, we had. She told us this was a ‘very serious breach of the Act’, to which we confessed our ignorance and apologized for the mistake.

The Inspector then explained that she had a complaint from an attendee at our salami day a fortnight earlier. According to the complaint:

NB: we never received written notice of the complaint – all of this was delivered verbally to us by The Inspector.

The Inspector told us that it appeared that there was ‘somebody in the industry who doesn’t like you very much,’ judging by the complaint.

She asked to be taken to the salamis hanging just behind us in the salami shed in plain view from the driveway, and whether they could take some photos. I laughingly responded that there were photos all over the internet, and that they were in fact our Facebook cover photo at the moment. That’s the last time I laughed. 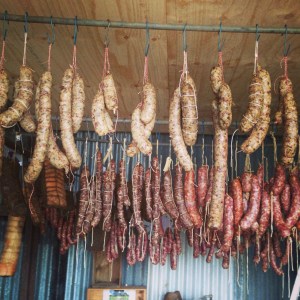 She then asked to see our licensed retail butcher’s shop here on the farm. We complied and they found nothing of concern. The Inspector then asked to be taken back to the salamis, noting on the way there that she needed to tell us something ‘we would not be happy about’ – that an outcome of their visit may be that they would have to destroy all our salami hanging in the shed. We asked why that would be when it is not part of our commercial business and is solely for our own consumption. She said we shouldn’t talk more about it now, but that she simply wanted us to be prepared for something that might happen that we wouldn’t like.

We offered to email all participants and ask them to dispose of the salamis they had taken home and apologise, telling them we had made a mistake and that we were not legally allowed to let them take the salami home. The Inspector said she would tell the CEO of PrimeSafe that we had offered to do this, and that it would reflect favourably on us that we had offered.

The Inspector rang the CEO for advice on whether the salami hanging in the shed had to be destroyed. She asked us to move away while she had this conversation. When she got off the phone she conferred with her colleague. They then waved us back to the shed.

The Inspector said ‘you’re not going to like this’ and proceeded to tell us that we were going to have to destroy all the salami. She said we had two choices, one was to cooperate and help take all the salami down to be condemned, and the other was to refuse to cooperate, in which case she and her colleague would go and wait at the bottom of our driveway for the police, who would forcibly return and destroy the salami with them.

She suggested it would not go as well for us if we opted for the latter, and that she had pleaded our case to the CEO and ‘kept the boning room out of it’. She asked us to cooperate on the basis that she was trying to help us, and that she believed that we were being honest, but that if we didn’t comply, she couldn’t promise she would continue to help us.

At this stage I burst into tears, and said ‘you don’t understand how important it is to us not to waste anything’ and that it was disrespectful to take an animal’s life and then destroy the meat. We reiterated that the salamis were for our own personal use, and that we had no intention of selling them, and that we would be more than willing to sign an undertaking to that effect. The Inspector asked me to compose myself, saying it ‘bothered her’ to see me upset. I said this whole event was upsetting.

I asked to see the relevant part of the Act that gave them the power to destroy our salamis. The Inspector showed me the section (section 72 of the Meat Industry Act 1993), which states that they have power to seize and condemn meat and even live animals. (We have subsequently received legal advice that The Inspector’s powers to destroy meat under these circumstances is ‘arguable’.)

I queried whether the shed was arguably actually a residence as it’s not part of our licensed premises, and The Inspector said ‘no, it’s land’. She said she could go anywhere on our land because we are PrimeSafe’s licensee.

Another 20 minutes of discussion and phone calls to the CEO resulted in nothing except reminders that if we were cooperative it was likely to ‘go better’ for us.

Our children returned from school and were standing nearby. The Inspector asked whether we could send the children into the house as they appeared distressed and shouldn’t see me upset. I replied that of course they were distressed as they hate waste as much as we do, but that we would not send them away as we share everything with our children and want them to understand the world in which they live.

We also had our four WWOOFers working on a pump about 15m away, and The Inspector said ‘there’s a crowd drawing, and this is when inspectors get hurt’, to which I replied that it was outrageous to suggest we were being in any way threatening. She agreed, but asked us to ‘understand her position’.

She also asked us to be calm and go in to destroy the salami ‘in a civilised manner’. I replied that there is nothing civilised about coming to our home and destroying meat from animals we raise with such care on our farm and kill purely for food, in a world where people are hungry.

Before the destruction began, we asked whether we could just take the meat inside and eat it ourselves, feed it to our dogs, or have it tested, but the answer was ‘no’.

The Inspector instructed Stuart to get a bin, preferably something the dogs couldn’t get into and that wasn’t a food safe bin as the ‘condemnation ink’ was toxic and might kill our dogs or contaminate food bins. He complied and got a large barrel.

I climbed a ladder and removed all of the salamis while my boys filmed me doing so. The Inspector got back on the phone with the CEO while I took the salamis down and asked her colleague to stay near us. 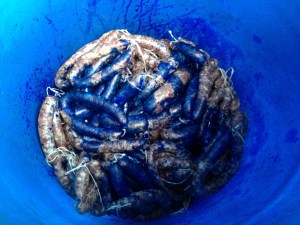 The Inspector said it was good we were going away for three weeks the next day to give time for PrimeSafe to decide what to do so that it was less likely to affect our day to day business. She said our next planned workshop upon our return in July may not be allowed to proceed. I asked what jurisdiction PrimeSafe has over our workshops if it doesn’t involve any meat for consumption or sale. She said the shed is a ‘meat processing facility’ because we are PrimeSafe licensees.

NB: subsequent legal advice identified no prohibitions in the Meat Industry Act on operating the workshops in the salami shed.

We asked again whether we should email all attendees and ask them to dispose of their salamis. The Inspector replied that that was up to us, and there was no requirement to do so.

As The Inspector and her colleague started to leave, I stopped her and said, ‘you know how you said you receive death threats and aren’t well liked?’ The Inspector pulled her shoulders back and her eyes widened slightly. I said, ‘well, people do like us, and they’re going to be really sad and angry when they learn what you did today.’

And so we’re telling you now, world. We’ve turned our own sadness and anger into action, and we’re ready to fight. We want to and we do produce safe food, but we produce something so much more than just safe. We produce food that nourishes our land, our family, and our community. We produce food in ways that value connection, flavour, and regeneration.

This regulator has been left unchecked for too long. It’s time you let your government know what kind of world you want to live in and what kind of food you want to eat. If you’re happy with imported, frozen meat manufactured into pale imitations of traditional smallgoods by Big Food, so be it. If not, this fight is your fight too.

With all the pressure PrimeSafe are under now that the Minister has announced the review, the cynical side of me is waiting for someone to manufacture or highly dramatise a food safety incident to regain the public’s sympathy and fear. So here’s me putting it on the public record to stave off that possibility or at least date stamp our awareness of that particular tactic.

And here’s hoping my cynicism is misplaced and that our government wants fair and consistent regulation just like we do.

Read Part 3 of The Regulation Diaries: PrimeSafe’s War on Meat

Read Part 4 of The Regulation Diaries: PrimeSafe’s War on Fat

33 thoughts on “The Regulation Diaries: PrimeSafe’s War Against Salami Days”