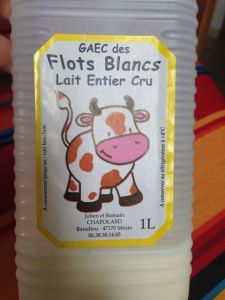 I could write a really long post about Victoria’s current raw milk debacle, but I’m going to keep this short and to the point.

The facts of the case are that there has been a tragic death of a child some months ago from Haemolytic Uremic Syndrome (HUS), which can potentially be caused by a strain of e coli that can sometimes be found in raw milk amongst other sources, such as undercooked beef mince or from contact with farm animals. Three or four (media reports have varied) other children also became ill but recovered. Some reports claimed all had consumed the same farm’s raw milk, others have claimed there were multiple brands.

What the media has not made at all clear is that these families all drank raw milk but there is no conclusion yet that raw milk caused their illness. And while that is still a possibility, the trial by media without a coroner’s report has been appalling.

Raw milk is legal and regulated in most countries in the world, including 30 states in the US and New Zealand, who are even regulated by the same body as Australia (Food Standards Australia New Zealand) but who have a different rule on raw milk. It’s sold in vending machines in Europe (and I recently heard in NZ as well?). As of 1 January 2015, Victoria requires the addition of a bittering agent (something used in anti-freeze?) to make so-called ‘bath milk’ (that people have been drinking for years here) too unpalatable to drink.

There are producers who are now unsure whether they can even sell their product – I can’t imagine the financial straits this Government’s rash decision may have put many into. I think it’s unconscionable for a government to make a decision that affects people’s livelihoods without public consultation or even waiting for evidence.

Here’s what I wrote to Jane Garrett, the Victorian Minister for Consumer Affairs. If you would like to write to Minister Garrett about your concerns regarding the new requirement, you can do so on jane.garrett@parliament.vic.gov.au

I am a free-range pig and cattle farmer at Jonai Farms & Meatsmiths in central Victoria. It is in this private and business owner capacity that I write to you. As farmers with an on-farm retail butcher’s shop, we are regulated by our local council, FSANZ, and PrimeSafe as well as DEPI and of course the Department of Health.

Taking control of the supply chain and doing our own further processing has made all the difference for us as small producers. It is the difference between running a loss or being a viable, ethical enterprise. And we are but one of many in the growing fair food movement – these innovations in local food production are everywhere and government must rethink legislative frameworks that were developed for long, industrial supply chains to protect consumers from invisible production and distribution systems.

We are currently building a curing room and commercial kitchen alongside our butcher’s shop in order to do more value adding of our pork and beef, and will soon seek our licence to make salami – classified as a high risk food. There are stringent regulations to ensure we and others in Australia manufacture, store and transport our produce safely, and as you know Australia performs very well on public health and food safety.

As have many others already, I write to urge you to reconsider your recent move to make the sale of raw milk illegal in Victoria. Prohibition has a long and demonstrated history of failing to meet its objective of protecting public health. And how far will you have to take the prohibition – will you ultimately ban smallholders and dairy farmers from drinking milk from their own cows? To what purpose?

Suppose you instead took food safety as seriously as you profess to and treated raw milk as carefully as other high-risk foods such as meat and eggs (and pasteurised dairy)? Just as it’s done in many other countries, where herds are tested, milk is batch tested and strict temperature controls are maintained. Some also have restrictions on the distance the raw milk can travel before sale in recognition that risk increases over time.

I would urge you to read the recent Johns Hopkins University report on raw milk. While they conclude that they can’t recommend drinking raw milk, the report paves a way for compromise to protect those who will continue to produce and consume it.

It is in nobody’s interest to force the production or consumption of it underground, which is a guaranteed outcome of prohibition whether you like it or not. History has much to teach us if only we pay attention.

4 thoughts on “Raw Milk in Victoria: A Letter to Minister Jane Garrett”