This was posted first on our farm blog, The Hedonist Life. 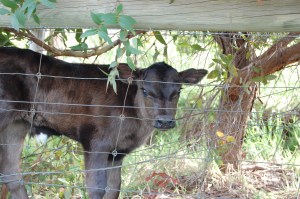 Everyone’s crying over spilt milk, or rather the calves who are sacrificed so that we may drink milk. Dairy farmers are crying over the reputational damage to their livelihood – and it’s not exactly a cushy job commanding six-figure salaries. And it seems to me that everyone is a little bit right, and a little bit wrong, but that there is a clear way forward.

To backtrack, this Animals Australia video which depicts the short life of a ‘bobby calf’ in a manner designed to evoke the most emotion possible managed to upset consumers and farmers equally, from what I can tell. According to the dairy farmers who are commenting on thoughtful blogs such as @milkmaidmarian’s, they don’t send their calves straight to the abattoir, and are acutely conscious of the value of each life they nurture and take on their farms. They frequently make the point that it is the city-based consumers who are too often utterly unaware (and uncaring?) of the conditions under which their food is grown.

I think it’s fantastic that animal welfare groups apply pressure to the livestock industry for humane treatment during an animal’s life and at its death. As an omnivore, I’m frankly not that interested (but also not really fussed) in being told I shouldn’t eat meat – I’ve made my choices thoughtfully and I’m happy with that – but I do want my meat ethically produced.

I also think it’s fantastic that farmers like Marian speak up about their practices, which are different from those displayed in the Animals Australia video. I know the dairy farmer near us has a similar practice – he raises the bull calves to 2 years then sells them for beef (and not for a lot of money, remember, as Friesians are not considered great eating for primal cuts) and the heifers are grown to be more milkers on the farm. I applaud farmers like Marian joining in pressuring for ethical treatment of animals – people like her can help by demonstrating alternatives.

But of course the reason the video exists is because there are apparently 700,000 bobby calves going to slaughter at around five days old – they are ‘waste products’ – and their few days of life entail an existence with which most people are deeply uncomfortable, both for its apparent brutality but also its brevity. I know I’m uncomfortable with the system, and grateful to be in a position to choose organic milk from a farm whose practices I know and trust.

I’m very conscious of the sensitivities in these debates – nobody wants to be ‘that guy who abuses animals’, and ‘abuse’ is far more relative than any of us care to admit. People running intensive animal operations (or CAFOs, aka ‘factory farms’) claim that the animals in their care are ‘happy’, ‘fine’, ‘safe’, or ‘healthy’, but by my definition that’s simply impossible, because I believe in respecting the ‘pigness of the pig’, as Joel Salatin says. So for me, farm animals should be able to graze, dig, forage, scratch and wander in a manner as close to how they would if we weren’t constraining them with some fences and the like as possible. But every time a consumer is happy to buy intensively-farmed chicken (or pork, or beef…), s/he is complicit in the system, and I have been too at times.

But when consumers (or the media or government) cry out in horror over the treatment of animals, they should think long and hard about the precarious position most farmers are in. Farms are at the mercy of the elements, which in this age of climate change has seen Australian farmers cope with constant rounds of drought and floods. Add to this an ever-narrowing range of distribution and retail outlets who control farm gate prices, which have plateaued for years in the face of rising costs of production.

As my limited experience as a producer grows and my interactions with other farmers deepens, I am keenly aware of how difficult it is to simply make a living producing food. And if all the farmers like us are forced out by low prices, consumers will be left with only intensive farms, the same ones where bobby calves are waste products, and pigs and chickens are raised in sheds.

So my thoughts are this: we farmers need to be transparent in our practices and let consumers judge for themselves whether they’re happy with how we treat our animals and the land. The internet is our friend – we can show pictures and tell the stories of our animals (well, slowly slowly until there’s a National Broadband Network, but that’s another post), so long as we are happy with what we’re doing. Those who won’t show us their animals certainly seem to be hiding something, though they protest they’re not. As @greenvalefarm said recently, ‘transparency is the best certification’.

And as consumers, we need to ask questions and listen to farmers. We need to value the people producing our food, both socially and economically. We need to better understand that the reason that farm gate prices may not have been immediately impacted by Coles dropping its price to $1 per litre for milk is because farmers have been getting around 50 cents per litre for over a decade anyway – any extra cash goes into the pockets of processors and retailers (that is, Coles and Woolworths, who have 80% market share in Australia).

I’m happy to pay a lot more than $1 per litre for my milk, but I want the extra to go back to farmers, not to those who would ‘value add’ to a product that I think is best straight from the cow! If you want that too, @flavourcrusader has an excellent alt.milk list on her wonderful blog.

9 thoughts on “On milk, farming, and life”